The entire Norwegian shipping industry as well as the Norwegian authorities have gathered to create the Green Coastal Shipping Programme. The programme participants are now ready to share their views and recommend progress in a roadmap addressed to the Norwegian Government. “Our vision is to go further into the future to ensure that Norway has established the world’s most efficient and environmentally friendly coastal shipping by 2050.  Ships operating in Norway’s extensive coastal areas should be fuelled by electricity, LNG or alternative environmentally friendly fuel. A 40% reduction in 2030 is a step along that road, while an 80% reduction is the target for 2050,” states Magnus Eide, DNV GL’s project manager and lead editor of the roadmap.

Ever since the Vikings ruled the oceans, Norway has been eager to develop efficient shipping. The ambition for the ongoing Norwegian Green Coastal Shipping Programme is also to ensure that the world continues to look to Norway when searching for the most environmentally friendly and efficient shipping solutions. 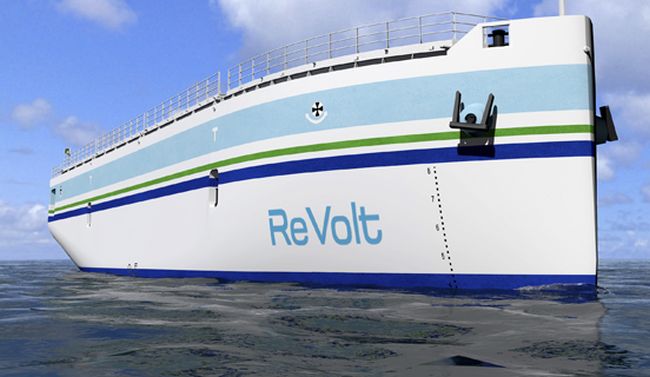 Is this a dream, a BHAG (Big Hairy Audacious Goal) or a realistic target?

“A quick, study of very recent history should convince everyone about its realism,” says Narve Mjøs, DNV GL, who is the Green Coastal Shipping Programme director.

There is plenty of evidence, he claims: “In 2001, the very first LNG-fuelled ship, the ferry Glutra, started to operate on the west coast of Norway. The offshore supply vessel Viking Lady had its already efficient and environmentally friendly LNG-fuelled machinery integrated with a marine fuel-cell power package in 2009 and had the first battery hybrid energy system installed on board in 2013. Early in 2015, another major step was taken when the first fully electric ferry, Ampere, was able to regularly transport as many as 120 cars across the almost 6km-wide Sognefjord in Norway.”

“New technologies to support green shipping are already available and innovative developments are reaching the market as we speak, but scaling and further improvements are needed. In a recent study by DNV GL for the Norwegian Ministry of Climate and Environment, we stress the need for “out-of-the-box” thinking if the ambitious emissions goal set by the government is to be reached. All new ships which are to operate along the Norwegian coast must use alternative fuel – heavy oil cannot be an option for new ships prepared for short sea shipping. This can only be achieved through public-private cooperation,” says Jon Rysst, senior vice president and head of DNV GL Maritime North Europe.

DNV GL took the initiative to engage Norway’s entire shipping cluster in creating the Green Coastal Shipping Programme back in January 2015. Cargo owners, logistics companies, ship-owners, port authorities, yards, suppliers, authorities, academia and the finance sector were all invited to join. The breadth of the project that today includes more than thirty participants is a major strength – not only for the programme itself, but also for the whole Norwegian shipping industry.

“Open and honest sharing and collaboration involving everyone is a necessity. Another success criterion is to showcase concrete examples of how to set targets and achieve ambitions,” explains Jon Rysst.

Five pilot projects were initiated and developed during the programme’s first phase. These five included several different ship types and infrastructures, with an emphasis on LNG and battery hybridization.

When the Green Coastal Shipping Programme entered its second phase this summer, the extension of three of those five pilot projects was confirmed. In addition, four new pilot projects have been kicked off.

“We need to ensure that theory and practical solutions can be merged,” says Narve Mjøs. “As heavy fuel oil cannot be an option for new ships operating along the Norwegian coast, alternative fuels such as biofuel and hydrogen must be developed too.”

Revolt, an electric-powered, zero-emission and unmanned ship concept, will also be included for further development within the Green Coastal Shipping Programme.

Looking ahead into the coming decades Narve Mjøs predicts: “We will see developments; similar to those we are now seeing in the automotive sector, in which plug-in hybrid (rechargeable) ships will also be an integral part of the land-based power system. The technology is developing fast, and so will we. Norway’s strength as a shipping nation is growing.”

The roadmap to be handed over to the Norwegian Government will set the direction to ensure that Norway continues to be a global shipping power and establishes the world’s most efficient and environmentally friendly coastal shipping by 2050.