After a successful approval process and survey, DNV GL and the Norwegian Maritime Directorate have issued the first polar ship certificate to the Norwegian platform survey vessel M/V Stril Polar owned by Simon Møkster Shipping AS.

The goal of the newly adopted IMO Polar Code is to ensure a minimum standard for ships entering into the Arctic waters and/or Antarctica. The code is an international set of rules that take into account the extreme conditions and the additional challenges vessels encounter in these areas. 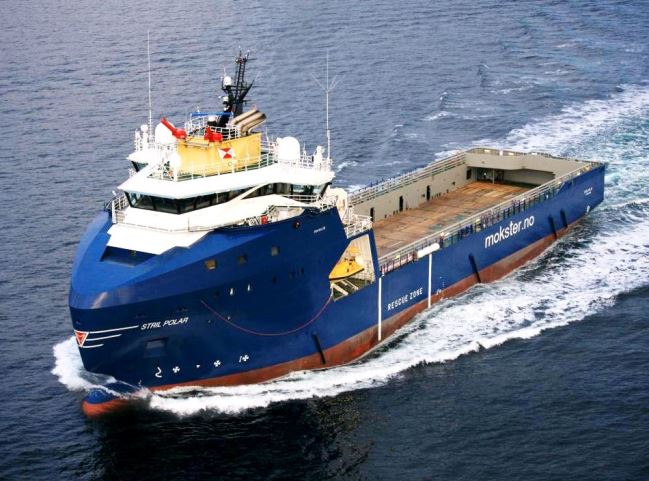 After being awarded the certification, Anne Jorunn Møkster, Managing Director of Simon Møkster Shipping AS, said:

“The strategy of Møkster Shipping has for many years been to operate in cold and rough waters as opposed to targeting warmer areas such as Brazil or Australia. Now that we have implemented the Polar Code for our offshore supply vessel M/V Stril Polar, we have the opportunity to go into polar areas knowing that the safety of ship, crew and the environment is well taken care of. As a result of the good cooperation we have had with DNV GL, the Norwegian Maritime Directorate and our own insurance company we are very motivated to get more vessels certified to the Polar Code.”

The M/V Polar Stril is built for operation in cold climates; therefore only minor adjustments were needed to achieve compliance with the Polar Code. The process of achieving compliance required DNV GL to undertake a risk assessment of the planned operational profile, as well as detailed review of the vessel’s equipment to ensure that the requirements of the code were met.

As a result, no deviations from the code were found during DNV GL’s inspection of the vessel together with the Norwegian Maritime Directorate in November, and M/V Stril Polar is now the first Norwegian ship with a Polar Code certification.

The IMO Polar Code is mandatory for all new SOLAS-registered ships that will be operating in Arctic and Antarctic waters as of 1. January 2017. For existing ships, the Polar Code certification is required after the first intermediate or renewal inspection after 1. January 2018. The polar code is a supplementary regulation to the existing IMO codes where the main requirements are related to safety (SOLAS) and the protection of the environment (MARPOL). DNV GL can, on behalf of the Flag States, issue Polar code certificates for ships that meet the code requirements.