DNV GL has honoured three engineers for their scientific research with the DNV GL Award for Young Professionals. Presented by DNV GL – Maritime CEO Knut Ørbeck-Nilssen, the award is designed to find innovative ideas for increasing safety, efficiency and sustainability in shipping. Seeking to honour the best research, it aims to support young graduates in the maritime field. Overall, 25 graduates took part in this year’s competition.

“With a fresh view on the most pressing challenges we face in shipping today, young professionals are a driving force in developing the innovative solutions we need to advance the industry as a whole. This award was created to honour the brightest among tomorrow’s industry experts and it is very encouraging to see the level of ingenuity with which this year’s winners have addressed issues such as adapting ship design tools to today’s growing world fleet, taking autonomous shipping to a new level, and finding a way to clean up marine pollution,” says Knut Ørbeck-Nilssen. 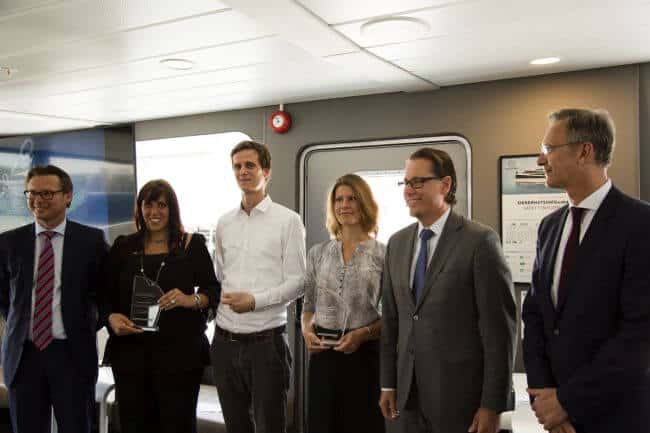 The award in the category ‘Safer’ and 1,000 Euros went to Matilde Andersen from Copenhagen. She graduated from the Danish Technical University in 2017 and has since joined Maersk Line as a vessel-performance analyst. Andersen won the award for her master’s thesis ‘Implementation of Generalized Modes in a 3D Finite Difference Sea-keeping Model’, which describes an extension of rigid-body seakeeping software to include vibration modes for hydro-elastic analyses of the fatigue strength of very large container ships.

With ever larger ships (especially container ships), hull structures become so flexible that there may be resonance between ship hull vibrations and natural seaway. From outlining the theoretical approach to the validation of numerical simulations against model test results and stating clear conclusions, this master’s thesis is a prime example of solid engineering work at a very high level.

Heinrich Grümmer’s paper ‘Design and Optimization of a Hubless Rim-Driven Thruster for an Autonomous Surface Vehicle using RANSE Simulations’ won the award in the category ‘Smarter’ and 1,000 Euros. Grümmer received his master’s degree from the TU Berlin in 2017. After completing his studies, he joined Potsdam-based software supplier Friendship Systems. His thesis describes a specific task for his aXatlantic project aiming at setting the world record for the first autonomous, solar-powered and unmanned crossing of an ocean.

His paper focuses on accurate performance prediction, based on CFD (computational fluid dynamics), while observing the particular demands on the propulsion system for an autonomous surface vessel. The hull form was optimized using a state-of-the-art engineering framework for maximum stability, providing the vessel with the ability to self-right. The work intelligently combines a multitude of approaches and software to create a concrete product using crowd funding.

The award in the category ‘Greener’ and 1,000 Euros went to Susanna Valenti, a former navy cadet who recently graduated from the University of Genoa, for her thesis ‘A Fleet of Sea-Cleaning Autonomous Units, Managed by a Waste-Recovery Island’. Her work describes both the procedures and tools used and the results obtained through prototyping some of the main operations conducted by a cleaning system, for which the feasibility had been previously determined.

Her system consists of a fleet of autonomous sea-cleaning units managed by a waste-recovery island. A multitude of small ‘foldable’, autonomous, versatile catamarans will allow the water’s surface to be cleaned of spilled oil, litter and micro plastics. The jury particularly appreciated the novelty of the idea and the good engineering judgements in elaborating the concept, combining “smarter” and “greener” as core values of DNV GL.

The submissions for next year’s DNV GL Award for Young Professionals can be submitted from 1 January to 31 March 2018. The range of topics includes shipbuilding and design as well as vessel operation and marine technology. The theme is ‘Safer, Smarter, Greener’. Entries will be judged by their quality, complexity and impact on society. All papers must be written in English and must not be older than three years. The jury will announce the winners in May 2018.