A stricken cargo ship drifting on its side off the French Atlantic coast will run aground in southwest France if a renewed attempt to tow it to port fails on Monday, a French maritime official said.

The 164-metre-long Modern Express, which was transporting 3,600 tonnes of wood along with construction machinery from Gabon to France, has been drifting towards the coast since its crew was evacuated by helicopter last week.

Officials believe its cargo may have shifted in heavy seas, causing it to list heavily to one side.

The distressed ship was about 100 kilometres from the resort town of Arcachon and would hit the French shore some time between Monday evening and Tuesday evening unless a last salvage effort on Monday is successful, Emmanuel de Oliviera, the head of France’s Atlantic coast authority, told reporters on Sunday afternoon. 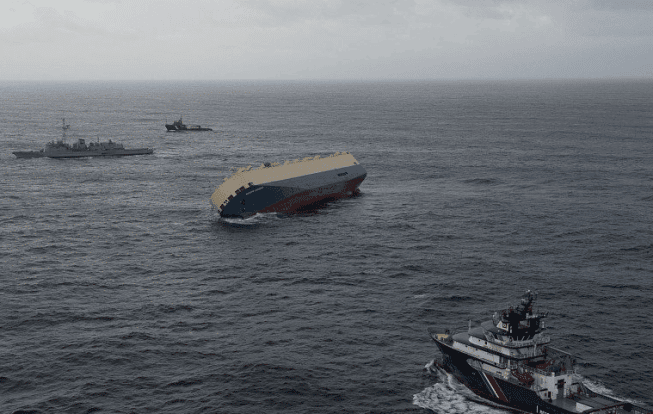 “As of today the sea is stronger than us,” he said. “There is still a favourable window tomorrow to try and connect a tugboat.”

If the salvage fails the ship was expected to hit the coast somewhere in the Landes administrative department, south of Arcachon, he said.

High winds and rough seas ruled out towing operations on Sunday, after the failure of a previous attempts this week in which a member of the salvage team was injured.

There was still no sign of fuel leaking from the crippled ship but the authorities would escort the vessel to limit any environmental pollution if it ran aground, de Oliviera said.

The extreme incline of the ship as well as the difficult sea conditions had so far prevented teams from boarding but calmer weather conditions were forecast for Monday.

Watch: Salvage of the Vessel Modern Express by SMIT Salvage

Port Of Rotterdam Offers Solution To Listing Vessel In Bilbao

Greenpeace Asks For Investigation Of The Modern Express’ Cargo