Precise planning and cooperation between the Port of Ipswich and marine agencies has seen the largest vessel ever being able to call at the port.

The Dijksgracht, which is 156.93 metres long, arrived at Ipswich with a shipment of 10,500 tonnes of rice from Texas, USA for the Ipswich Grain Terminal. The rice was discharged at the Orwell Bulk Terminal, which was opened last year after a £2.2m investment. 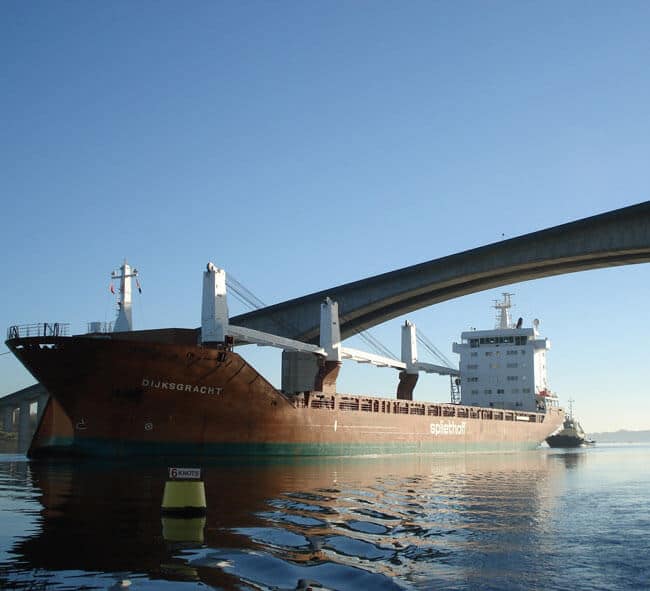 The Dijksgracht, the largest vessel to call at the Port of Ipswich, is pictured heading under the Orwell Bridge.

The ABP Ipswich marine team worked with the Harwich Haven Authority and pilots to plan the safe arrival of the vessel which only had approximately 0.37m of clearance between the top of the ship and the Orwell Bridge.

ABP Divisional Port Manager, Paul Ager said: “The arrival of the Dijksgracht required precise planning. Marine teams who work on the River Orwell came together to ensure the ship sailed in on a spring tide which gave it approximately one and a half hours to complete the transit up the river.

“Furthermore, there was only 25 minute window to get the ship safely under the Orwell Bridge. The cooperation by all the parties has ensured this operation was executed successfully”

Marine staff were also kept busy with the berthing of the Amazoneborg, a similarly large ship which is 143 metres long, and arrived in Ipswich not long after the Dijksgracht. The Amazoneborg was carrying 11,000 tonnes of bulk fertiliser from Egypt for Nidera.

Mr Ager said: “It is fantastic for the Port of Ipswich to welcome these vessels and reaffirms the continued investment that ABP are putting into infrastructure which allows cargo of this magnitude to discharge and be stored in Ipswich.

“The Port of Ipswich has invested £2.2 million into constructing a new 40,000 square foot bulk store that will be completed in early 2017.

“We look forward to offering even more state-of-the-art storage facilities on behalf of our customers going forward as we continue to update, improve and expand our storage offering at the UK’s leading agricultural export port.”