Royal Navy warship HMS Dragon has seized three tonnes of hashish in one of the most significant drugs busts in the Gulf this year, dealing a major blow to the funding of terrorism. 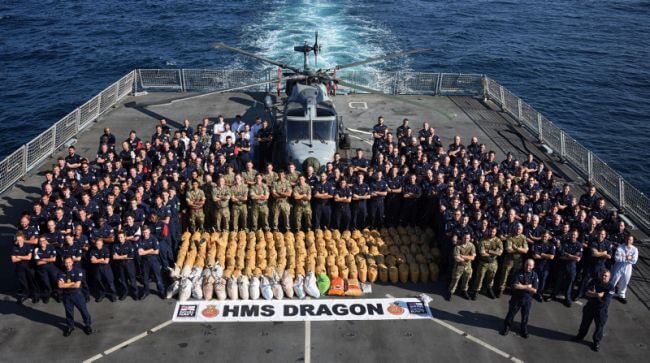 The Portsmouth-based Type 45 destroyer was on patrol in the Middle East when they came across a suspicious dhow – a type of vessel common to the Middle East – in a notorious drug smuggling route known as the ‘Hash Highway’.

Swooping into action, sailors and Royal Marines from HMS Dragon launched their fast boats to intercept and board the vessel, before conducting a painstaking search of its compartments. They ultimately found 148 bags of hashish, weighing around 3,048kg.

“The success of HMS Dragon’s seizure is the latest blow struck to this nefarious industry.” 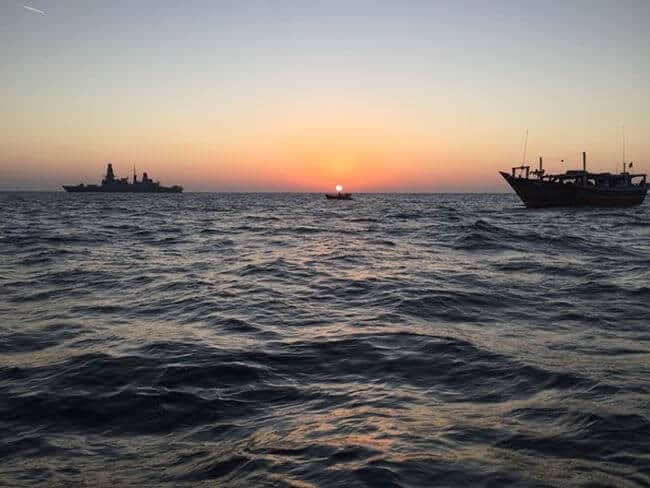 The ‘Hash Highway’ runs from Afghanistan, a major drugs producer, by land through Iran or Pakistan, and then across the sea to countries in East Africa and the Middle East. Profits from drug smuggling are a known source funding for terrorist organisations and criminal networks.

Lieutenant Laurie Williams is HMS Dragon’s deputy marine engineer officer and boarding officer. He said: “During our initial search, it became apparent there were a number of reasons to suspect the show could be involved in illicit activity.

“This led to a search of the vessel, where my team managed to find the concealed drugs. This success validates the significant hard work of all on board to ensure we were in the right place, with the right training and equipment and intelligence to achieve this result; one of the largest recent finds within this region”.

The haul comes days after HMS Dragon became the first Royal Navy destroyer to work alongside F35 Lightning jets on operations in the Middle East.

Commander Mike Carter-Quinn, HMS Dragon’s Commanding Officer, said: “This seizure is testament not only to days of focused hard work, but also to months of effort in preparation for HMS Dragon’s operational deployment.

“The Dragons – all 260 of my crew, from the Royal Navy, Royal Marines, and US Coastguard – have done themselves and their families proud and I couldn’t be more honoured to serve with them every day.”

HMS Dragon has been working in the Middle East as part of the Combined Task Force 150, a multi-national organisation responsible for maintaining security in some of the world’s most important shipping lanes. HMS Dragon will continue to support the task force over the coming days, before participating in an exercise with the Indian Navy.

IMO: Preparation Is The Key In Ballast Water Management