The Danish Environment Minister, Esben Lunde Larsen, had to answer to the Parliament on 14 December following questions put to the Government by all the opposition parties. The long list of questions had been drafted two months earlier, prompted by the revelations of Maersk’s shipbreaking practices in South Asia by the Danish investigative journalists, Danwatch, and the daily newspaper Politiken. All opposition parties called on the Danish Government to ensure that Maersk’s end-of-life vessels cannot be broken down in beaching yards.

Apart from a semi-attempt to filibuster by reading out the already available written answers and paraphrasing the Hong Kong Convention, the Minister insisted on quoting technical details and the obligation to follow the law. He was unable to give political direction on how the Government would work to stop Danish companies’ use of the polluting and dangerous beaching practices in South Asia and on Maersk’s threat to swap the Danish flag for a non-EU flag if the EU does not approve ship recycling on the beaches of Alang. 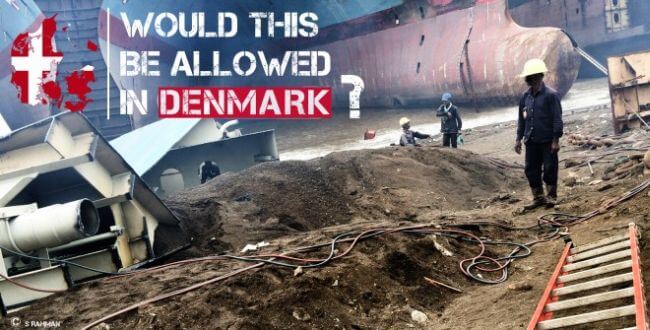 The MPs present, representing the spectrum of Danish opposition political parties (including Social democrat member of parliament, Christian Rabjerg Madsen, and the head of Socialistisk Folkeparti, Pia Olsen Dyhr, as well as Ida Auken from Radikale Venstre, Christian Poll from Alternativet, and Marie Reumert Gjerding from Enhedslisten) and the Chair (Pia Adelsteen from Dankse Folkeparti), incessantly pressed the Minister to answer concrete and direct questions on the Danish government’s position on beaching, Maersk’s threat to flag out, and whether the government is pressing the EU Commission to list beaching yards in Alang on the upcoming EU list of accepted facilities world-wide.

If ships were broken on beaches in Denmark there would be an uproar, the MPs stated. They asked the Minister to outline how he thought safe working conditions and protection from pollution could ever be ensured when dismantling a vessel in the intertidal zone of a beach, and clearly requested the Minister to provide strong political support to end beaching. To all the questions and comments, the Minister however repeatedly appealed to his ignorance about the shipbreaking industry and to the literal text of the EU guidelines under the Ship Recycling Regulation. Whilst the Minister admitted that flagging out to circumvent EU law is not compatible with responsible business practices, he refused to answer how he would make sure that Danish shipping companies only use facilities that are on the upcoming EU List of approved recycling practices, and which is not expected to include facilities that use the beaching method. Clearly, Minister Lunde Larsen, in the two months he had to prepare before the meeting with the MPs, chose to only be briefed by the interested lobby groups who promote beaching practices; most notably the biggest company in Denmark, Maersk.

“It is shocking that the Minister gave no political comment or direction, but rather only contained a copy-pasted quotation fed to him by Maersk. It reveals the lack of political backbone when we see that Maersk is in such a powerful position to issue statements on behalf of the Danish government and that the Minister seems to believe this is acceptable,” said Ingvild Jenssen, Policy Director of the NGO Shipbreaking Platform.

The insistent drilling by the MPs to the Minister on the government’s position on beaching left no time for Esben Lunde Larsen to answer all questions. The MPs would have particularly liked to go into more depth on issues related to the government policy to enhance the ship recycling industry in Denmark, and crucially on the government’s engagement to investigate on the illegal export of the Maersk-owned oil production and storage tanker, North Sea Producer, from the UK to Bangladesh. At the end of the meeting, Pia Olsen Dyhr (SF) called for another meeting with the Minister to discuss these issues more in detail.