The new sea lock, which will be the world’s largest, will be opened later than initially planned. Dutch Minister of Infrastructure and Water Management, Cora van Nieuwenhuizen, informed the Dutch House of Representatives of the modified schedule for the completion of the lock near IJmuiden. The sea lock will be completed 27 months later. The date will consequently be moved to no later than the end of January 2022. 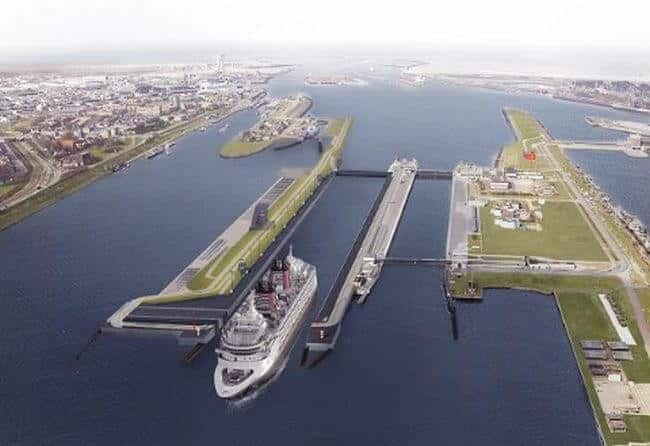 The delay will not have any consequences for shipping traffic to and from the ports of the North Sea Canal because the existing Noordersluis lock will now remain operational longer. This does, however, mean that larger ships than is currently the case will not be able to call at our port.

The related press release (in Dutch) is available on the Directorate-General for Public Works and Water Management (Rijkswaterstaat/RWS) website.

Port of Amsterdam has been informed that the new sea lock will become operational 27 months later than initially planned. The completion will consequently be moved to no later than the end of January 2022. This does unfortunately mean that larger ships than is currently the case will not be able to call at our port.

We regret this outcome of events. Since the Noordersluis lock will now remain operational longer, the accessibility of ports in the North Sea Canal Area will, in any event, not be compromised.

The Directorate-General for Public Works and Water Management (Rijkswaterstaat/RWS) has assured us that the ports of IJmuiden, Beverwijk, Zaanstad and Amsterdam will remain easily accessible in the next few years. It is therefore vital that the Noordersluis lock remains in optimum condition.

We remain of the view that the construction of the new sea lock – even with this delay – is an impressive infrastructure project which contributes significantly to the economy of the North Sea Canal Area. Port of Amsterdam has confidence in the successful continuation of the project.

Seafarer Help Annual Review 2015 Launched
Want to share your tips and advice? Got questions? Visit the community forum to ask questions, get answers, meet people, and share your tips!