You are here: Home › Shipping News › Day Of The Seafarer Is Meaningless Without Vaccines And Our Rights Restored
TwitterFacebookLinkedInPinterestBuffer

Today is Day of the Seafarer and this year’s theme is a ‘future fair for seafarers’. But there is little point contemplating what a fair future looks like for the world’s seafarers while the injustices of the present so loudly demand our attention -– and action.

The life of a seafarer has always been one of sacrifice and hard work. Days, weeks, months at sea away from our families in all weather; relied upon to keep the world and its people moving.

And big problems have always been lurking just beneath the surface in our industry when it comes to the treatment of seafarers: cultural, regulatory, systemic. Insecure work. Unsafe practices. Blacklisting. Abandonment. Flags of Convenience. 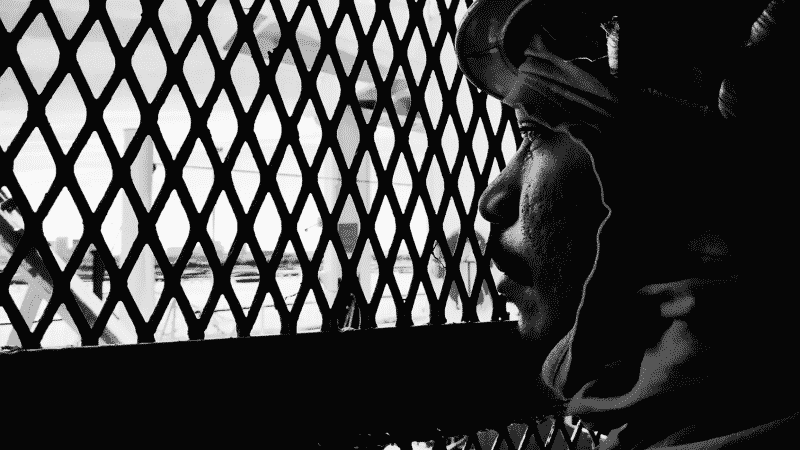 In the last year, the pandemic pushed these long-standing problems out of the aquatic shadows, up above the murky depths and into the spotlight for the world to see. From the Ever Given, to the MV Aman, to the thousands of local stories of seafarers trapped working on ships: the world has been engaged on our issues like never before. And so, the public has borne witness to the growing waves of injustice that crash onto the backs of seafarers.

Expected to do so much more than ever before, even as we see our rights sinking before our eyes, this year’s Day of the Seafarer is not a day for celebration for seafarers. But it is a day to say: ‘no more’. 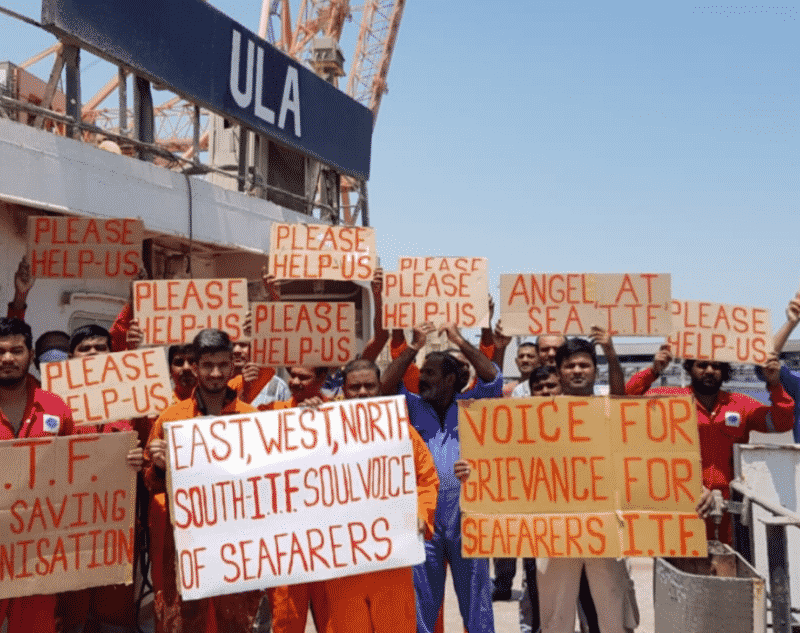 The crew of the MV ULA were freed thanks to ITF advocacy in 2021 after two years trapped on the bulk carrier after its owner stopped paying their wages and cut off food, fuel and water to the vessel.

Getting the ULA seafarers paid and repatriated home was made much more difficult because of the Flag of Convenience system and the murkiness of the shipping industry when it came to identifying owners and holding them to account, said ITF Seafarers’ Section chair David Heindel.

The ULA was briefly flagged to Palau, a tiny pacific republic 9,265 km from the port of Shuaiba, Kuwait. None of the crew had been to Palau before their abandonment. Nor has the ship. (Credit: ITF)

The pandemic changed our world

For the 300,000 seafarers who powered the cruise ship industry, the last year will be hard to forget because of the chaos and change it brought to their lives. The world went from producing record numbers of record-sized cruise vessels to a situation of stranded seafarers and bays filled with idle ships that looked more like marine graveyards.

Cruise seafarers not only lost their jobs, but the pride and connection that come with being able to use one’s skills in a vibrant industry that so many seafarers really do love. While we were proud to help get hundreds of thousands of cruise seafarers home as borders were closing around them last year, many are still waiting for a safe restart that gets them back on board.

But for seafarers in other sectors, like those in cargo and bulk shipping, on our tugs and offshore service vessels, life went on. Except what ‘life’ increasingly came to look like was longer days, thinner crews, and our rights becoming less and less accessible. 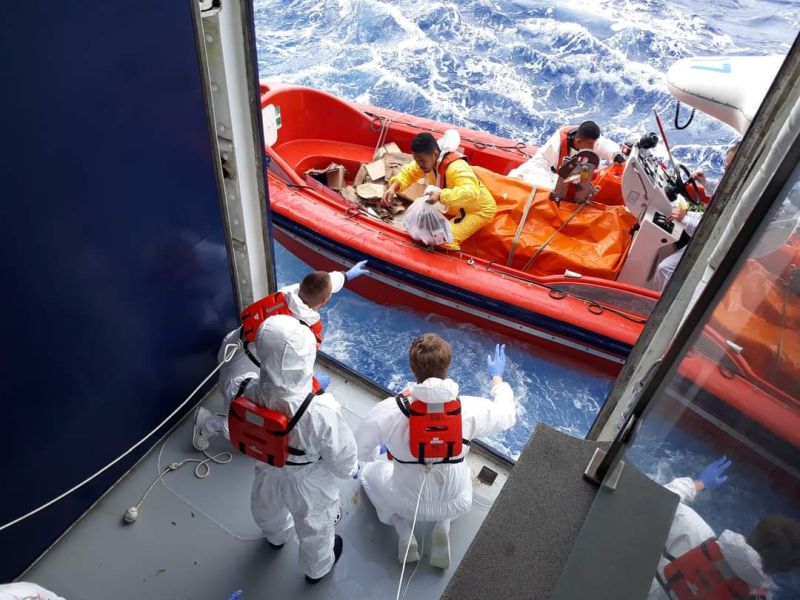 A food transfer takes place in mid-2020, supplying seafarers onboard who have had their rights removed to go ashore for medical attention, fresh food or even a walk. (Credit: Samuel Ongbit Jr.)

Governments stole our right to stop working: this is modern slavery

Since the outbreak of the pandemic, hundreds of thousands of seafarers have been forced to work for weeks, months and – for some – even years beyond their initial contracts.

This ‘crew change crisis’ is a government-made crisis. That is because governments have torn up seafarers’ long-held rights to come ashore to go home via a ‘port state’ at the end of our contracts on vessels. Governments have also scrapped border and immigration exemptions which seafarers need to enter countries when joining a ship, and are an essential part of relieving those who are on board and need to go home.

Some of our home countries have even blocked us from getting back to our families, while yet more ban us from being able to leave to do our jobs.

These indiscriminate government rules result in an increasingly tired and fatigued workforce being told they are ‘heroes’ of the pandemic while they watch their children grow up through the tiny glowing screen of a FaceTime call at the end of another long day. 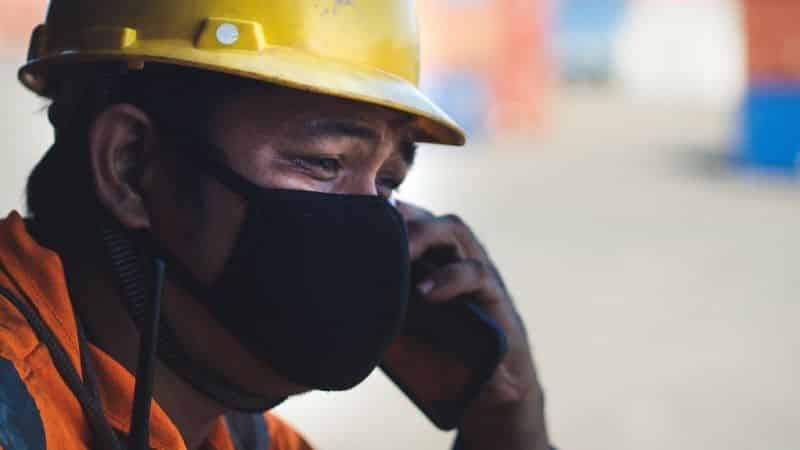 ‘We are told we are heroes of the pandemic, but what kind of hero cannot hug his son? Or laugh with his wife?”

We have despaired in the last year at the yo-yoing policies of governments who refuse to acknowledge their role in stripping away the rights of seafarers that keeps them working on ships.

When progress has been made by the world’s seafaring unions to restore our rights, governments have snatched them away again in panics spurred by the latest virus variant or complete misunderstandings about how our industry works.

Being unable to stop working creates a situation of forced labour. What is being experienced right now by seafarers is tantamount to slavery. It’s that simple.

Port state governments are not alone in their responsibility for creating the worst year many seafarers have ever had. The inglorious honour also belongs to the world’s ‘flag states’, the countries that are supposed to be responsible for the welfare and safety of the seafarers employed on the vessels flying their national flag.

But instead of springing into action to assist seafarers in defending our rights or leading the way to ensure every seafarer is vaccinated against this deadly virus, most flag states are nowhere to be seen. It’s no wonder that the ITF and our inspectors had to recover almost USD $45 million last year for seafarers from employers who didn’t pay them. When flag states don’t care about seafarers, why should bad bosses? 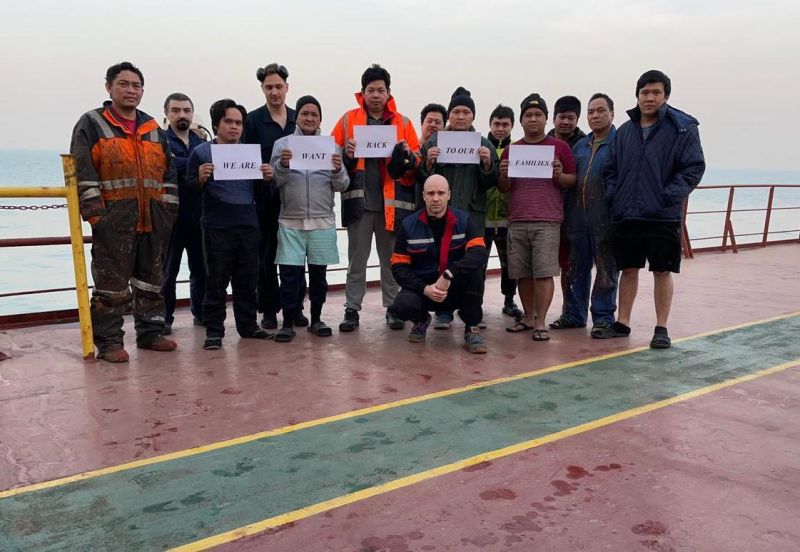 Hundreds of seafarers were left stranded for months onboard up to 80 different vessels off the coast of China as the country ramped up its unofficial trade war with Australia. Many of those on the Liberian-flagged MV Christine Oldendorff had already been months aboard the bulk carrier by August 2020, when they inadvertently became pawns in the diplomatic stoush. (Credit: ITF)

We at the ITF and in our seafaring unions will always assist seafarers in need. Whether they are victimised by rogue shipowners, or targeted for criminalisation by blame-shifting officials, or trapped on a ship: we will be there. We will show up. That’s because we treat every day like day of the seafarer. Isn’t it time those highly profitable flag registers were made to do likewise?

It is hard to know who the greater hypocrites have been in this last year: those many port states who have taken every shipment of food, fuel, medicines and electronics delivered by seafarers, venerating them as ‘heroes’, while at the same time denying them their human right to stop working; or the flag states, who made money by standing by, watching our misery grow, and doing absolutely nothing to stop it. 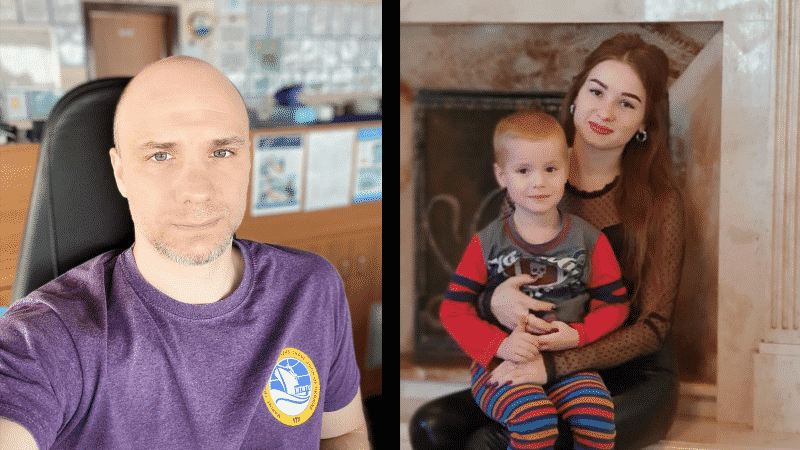 Oleg Bilokoniev, 2nd Officer of the Liberian-flagged MV Christine Oldendorff, had already spent seven months aboard the bulk carrier when Chinese authorities started to block coal ships like his from unloading their cargo because it had come from Australia.
Prevented from docking and unable to sign off, Ukrainian Oleg would end up spending more than a year in total on the vessel – six months of them floating in the Yellow Sea with only his crew mates as company. The hardest part, the seafarer wrote to the ITF in January 2021, was knowing his son Denis (3 years) would soon be at school, and not be the little boy Oleg left behind. (Credit: O. Bilokoniev)

Your thanks won’t restore our rights, but your actions will

Once a year the world is asked to acknowledge the seafarers and pay tribute to everything we do, as the ‘unsung heroes’ of global trade and transport. They tell us that we work hard, that we ‘deserve better’.

But if nothing changes, if these kind words of thanks do not lead to concrete action to restore our rights, then they are worse than tokenistic platitudes; they are an insult.

If you really want to thank seafarers, then we invite you to stand with us for real change to restore our rights, right now.

You can ask your national government to take actions like these below.

The world’s governments can act immediately to reduce the suffering and illegal mistreatment of seafarers:

Vaccinations: the passport to restoring our rights

While returning to life pre-Covid won’t fix all the problems that have lurked below the surface of seafaring for decades, it will certainly help. Governments’ inclination to sacrifice the welfare of seafarers and our rights to what they think is the best way to protect their local populations from the virus is predictable – if hard to accept.

We know that the only way that governments will reliably and consistently restore seafarers’ rights to crew change, shore leave and medical access, is for the virus to be gone. That is, practically eliminated in the community onshore and offshore.

What does that mean? It means we need every seafarer and their family standing up and saying ‘yes’ to receiving the vaccine in its many forms. It means governments supporting more local manufacturing with the TRIPS waiver. It means the world’s wealthiest countries, industries and shipowners all playing their part in getting more doses to more people around the world. It means the Flags of Convenience taking up their final chance to prove that their registers are anything more than a money-making sham.

Vaccinations are our passport to return to some degree of normality. Vaccinations are the way we restore our rights. Let’s get on with it, so that we can all be part of the conversation about what a fairer future looks like.

Mauritius Government Must Release Wakashio Crew Held For A Year Without Charge: ITF Seafarers
Companies To Ensure Seafarers That Want To Be Vaccinated Are Allowed To: ITF Seafarers