The crew of the DFDS ship BRITANNIA SEAWAYS receives the award for the courage displayed in a vehement fire on board in 2013.

The crew receives the award for the efforts made when a fire broke out on the ship on Saturday, 16 November 2013, while it was carrying military equipment along the Norwegian coast. It was an extensive fire with flames extending more than 30 metres in the air, extreme heat and explosions. Thanks to the professionalism and courage displayed by the Captain and the crew, they succeeded in getting the fire under control. Nobody among the 32 persons on board was injured, and a major pollution incident was prevented. 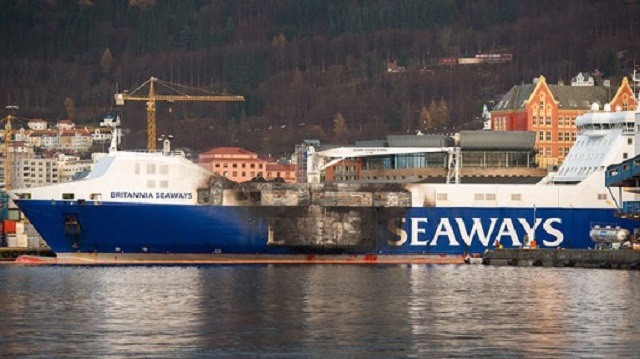 Denmark has nominated the crew for the award. In the nomination, it is, inter alia, stressed that Captain Andreas Kristensen and his crew displayed great courage and sound seamanship when they fought the fire, while putting their own lives at risk.

”First and foremost, I would like to congratulate Captain Andreas Kristensen and the entire crew on board BRITANNIA SEAWAYS. This award is a distinguished recognition of the unique actions taken by the crew. There is no doubt that, during the fire, the crew went far beyond what was expected of them, not least considering the considerable danger they were facing,” says Director-General of the Danish Maritime Authority Andreas Nordseth.

The award will be presented to the Captain on behalf of the entire crew at a ceremony to be held in London on the opening day of the next session of the IMO Maritime Safety Committee, 17 November 2014.

The IMO Bravery Award has been instituted as a unique, international recognition of exceptional bravery displayed at sea in order to save the lives of others or to prevent pollution of the marine environment. The award was presented for the first time in 2007, and it is given on the basis of nominations by member States or interest organisations. This year, the IMO had received 35 nominations.