Damen Shipyards Group has posted a net loss of 17 million euro for 2018. This is the first time in 15 years that the Dutch shipbuilder has announced losses. Damen reports that its financial situation stems from a sustained period of difficulty in a number of maritime sectors and investments it has made in its future.

Notably, despite rising oil prices, the offshore hydrocarbon sectors continue to present tough trading conditions. The harbour towage sector, a key market for Damen, is also underperforming as competition in the marketplace exerts downward pressure on prices and tug operators seek to consolidate their operations. And, while project activity has increased recently for the group’s repair and conversion division, profit generated remains low as the group is absorbing operating losses at its acquired companies Verolme, Curaçao and Mangalia Romania.

A further factor is the current lower than usual levels of activity at Damen Schelde Naval Shipbuilding. The group’s CEO, Réne Berkvens says, “Despite significant investment, over a sustained period, aimed at participation in various projects, for example the Dutch submarine and German MKS 180 programmes, awards have not yet been forthcoming. Defence & security projects are a critical factor, not only for the success of Damen, but also for the navy and for the maintenance of a domestic defence industry within the Netherlands. On numerous occasions historically, the Royal Netherlands Navy has showed a progressive and innovative approach, serving as the launching customer for naval technologies that have gone on to be used by navies throughout the world. Because of this, we have at Damen and within our research institutes and universities, a wealth of knowledge that it is a vital element of our economy and an asset to the country.” 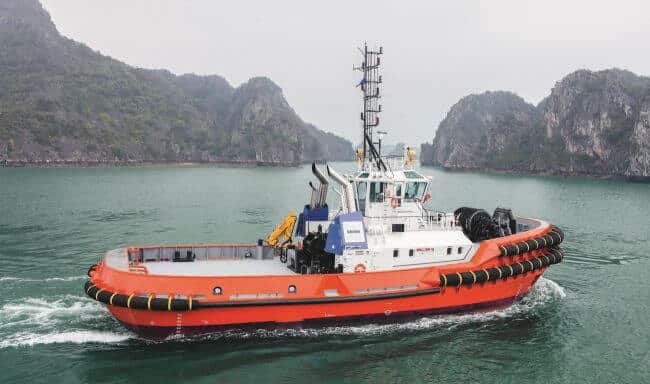 Despite the difficult market conditions, the shipyards group has continued to book a large amount of projects – worth in the region of 1.9 billion Euro in 2018.

Summing up, Mr Berkvens, states “Turnover is generally healthy. The difficulty is that, despite high levels of activity, profit is under pressure from a combination of factors including vessel oversupply in some markets, fierce competition and increasing labour costs in certain regions.”

Damen, with multi-market penetration, has proven resilient to turbulent market conditions in the past. At the present time, numerous maritime markets do show signs of promise including cruise, inland shipping, public transport, yachting and offshore renewables.

Further factors affecting Damen’s end of year financial results include the shipyard group’s continued investment in facilities, capabilities and personnel. Amongst other things, this includes the group’s acquisition of a stake in the shipyard now known as Damen Shipyards Mangalia in Romania. With this and other investments, Damen has entered the cruise, RoPax and large offshore vessel construction markets and prepares itself further for participation in future large-scale defence & security contracts.

“It’s a sign of the strength of our company that it continues to invest during these difficult times,” explains Mr Berkvens. “Damen, as a family business, holds a long-term view and continues to plan ahead in full confidence of better times in the future. In addition to preparing for this via a programme of continued acquisition and facilities development, we feel it is crucial that we continue to invest in our personnel and in maintaining employment opportunities. Only in this way can we be sure that, when the markets do eventually recover, both Damen and the Netherlands retain their access to the skills and knowledge necessary to maintain a successful shipbuilding industry.”