On March 18, 2019, a ceremony was held at Damen Yichang Shipyard, China, to mark the start of cutting steel for the first of a planned series of short-sea LNG Bunker vessels to be built for Eesti Gaas of Estonia. The 6,000m³ capacity vessel and its future sister-ships are intended to accelerate the wider adoption of LNG as a cleaner alternative fuel in the north-eastern region of the Baltic Sea by providing a mobile and efficient ship-to-ship distribution service for the first time. 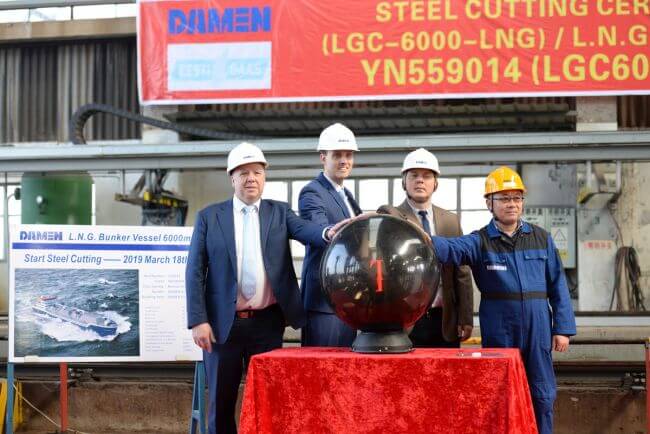 Virgo Vinkel, Technical Manager (Tallink), represented AS Infortar, the parent company of Eesti Gaas, at the ceremony. The event was also attended by Peter Anssems, Sales Manager, Sales East and South-East Europe, and Kevin Douma, Project Manager, Offshore and Transport, both from Damen Shipyards Gorinchem, together with Mr. Deng Zhiping, Managing Director of Damen Yichang Shipyard and members of his management team.

At the ceremony the first sections of the 100-metre, LGC 6000 LNG class vessel were cut from 8mm steel plate and will eventually be part of the wall separating the ship’s engine room from the tank hold. Assembly will start in May with the installation of the LNG tanks scheduled for November. Following sea trials, the ship will arrive in Estonia next summer and will start serving LNG clients in the autumn. The new vessel will be capable of carrying out bunker activities at designated locations both in and outside ports.

The LGC 6000 LNG is designed to meet the requirements of ICE class 1A certification, allowing her to operate all year in the Gulf of Finland and the northern Baltic. She will also achieve green ship notation. A dual-fuel propulsion system will be used for the management of the Boil-Off Gas (BOG) in combination with a gas burner, and the interior of the vessel will feature high-quality accommodation for her crew. 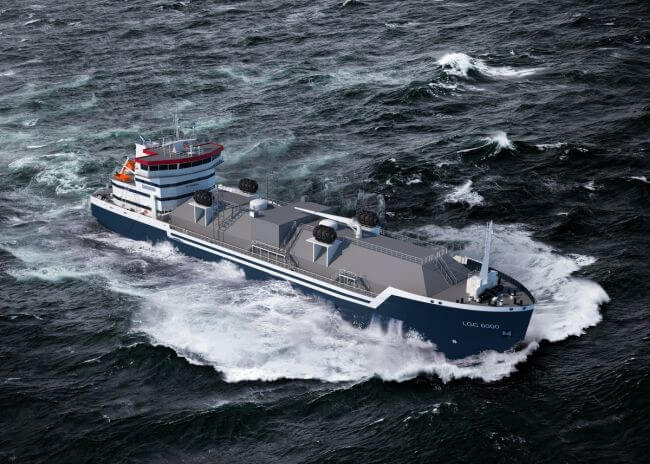 Eesti Gaas will operate the vessel under a long-term charter from its parent company Infortar AS. Since 2016, Eesti Gaas has expanded its LNG transport and bunkering capacity by entering long-term LNG supply contracts with shipping companies and industrial consumers. Over time, as the adoption of LNG as a marine fuel gains momentum, it is anticipated that additional LGC 6000 LNG vessels will enter operation.

“The start of steel cutting for this brand-new vessel for Infortar marks an important milestone in the start of her construction,” said Peter Anssems, in his speech at the steel-cutting. “We are very grateful to Eesti Gaas and Infortar for choosing Damen to build their new LNG bunkering vessel. This new building project is also an excellent example of the cooperation between China and the Netherlands and underlines the capabilities of Damen Yichang Shipyard as a builder of sophisticated vessels.”

“With this high-tech joint venture, Eesti Gaas and our launch client ferry-operator Tallink will ascend to having the title of the LNG companies with the most competence and experience in this region,” said Kalev Reiljan, a member of the management board of Eesti Gaas. “Eesti Gaas has performed over 1,500 port-based LNG truck-to-ship refuellings of Tallink’s LNG-powered Megastar ferry and now we are moving on toward offshore, more mobile solutions.”

This project is co-funded by the EU through the CEF Transport programme.