The Dutch fishing cooperative YE 118 Noordland BV has taken delivery of its new shellfish dredger from Damen Maaskant Shipyards Stellendam. While the vessel shares the same hull design as other fishing vessels built previously at the yard, it is the ground-breaking techniques used in the product harvesting and handling methods that set her apart.

There are a number of challenges facing the razor shell fishing sector – perhaps the most pertinent is being able to harvest an undamaged product. This is due to the fact that razor shells are fragile and thus easily broken. Once on board, the next task is to keep the catch alive and healthy as razor shells are a particularly sensitive species. 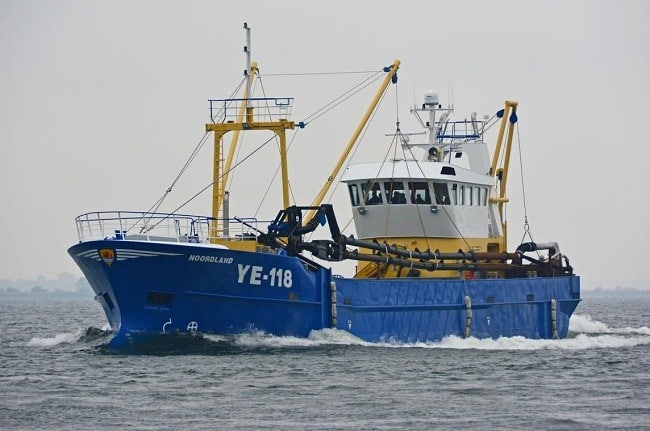 By combining their knowledge, experience and skills, Damen Maaskant Shipyards Stellendam and its client have developed a vessel that is capable of overcoming both these challenges.

It comprises a 5.5-tonne basket that is lowered over the vessel’s port side with an A-frame. Once in position, the gear is pulled along the seabed at a speed of 0.3 knots. A water jet pump loosens the sand on the seabed and this loosened mixture of sand, water and razor shells is then pumped on board. The unique design of this pump takes into account the delicate structure of the product.

Using apparatus developed by the client’s extensive experience in the industry, the catch then is sorted to remove broken and empty shells. The sorted razor shells are then transferred to mid-ship holding tubs.

To keep the catch in optimum condition, these tubs – 30 in total – receive a constant supply of fresh seawater from an additional pump system.

As well as the design and engineering, the yard’s project management team also contributed their knowledge to incorporate a ballast system into the YE118 Noordland’s design. Making the vessel more stable in rougher seas, this system will allow the owner to continue fishing even if wave heights reach 2.5 metres.

Furthermore, developing systems used in the sand dredging sector, the 43-metre vessel’s fishing gear is a wave compensating system – adding to the stability of the whole process.

Talking about the sea trials that took place in the week prior to delivery, Damen Maaskant Shipyards Stellendam Project Manager Gerrie Maaskant is enthusiastic: “This is a very effective design in many aspects. Compared to the owner’s previous vessel, production is increased due to the efficient fishing pump set-up. The equipment we have installed also leads to improved quality of the product as there are significantly less broken shells.”

Following fabrication in Poland, the YE118 Noordland’s hull arrived at Damen Maaskant Shipyards Stellendam in May 2015 – representing a short construction period. “We like to have short lines of communication with clients,” continues Mr Maaskant. “This has made the construction of the YE118 Noordland a very efficient and cooperative process.”