Fuel oils are mainly a blend of oils and other components, for example; aromatic hydrocarbons such as benzene, toluene and xylene. Gasoline, for instance, is a refined product of petroleum, consisting of a mixture of hydrocarbons, additives and blending agents. Its composition varies widely depending on the crude oils used, the refinery processes, the type of product demanded and its specifications.

For the past two decades, the global push to reduce greenhouse gasses, coupled with the soaring price of fuel oil and insecurity of fuel supply, has focused governments on the need for alternative resources. The European Community has decreed that sustainable fuel policies should be adopted. They have set targets for road transport to use at least 10% bio-fuel by 2022. The growth of bio-fuel and bio- diesel is therefore expected to grow significantly. Since 2010, the European Community has required fuel companies to mix 5 per cent bioethanol with 95 per cent petrol and 5 per cent biodiesel with 95 per cent conventional diesel. Fuel mixes at these levels will not damage the fuel systems of motor vehicles and some manufacturers are even producing cars that can use ‘B30’ fuel – a 30 per cent biodiesel / 70 per cent diesel mix. Biodiesel is derived from vegetable oils, such as palm, coconut, rapeseed and animal fats. 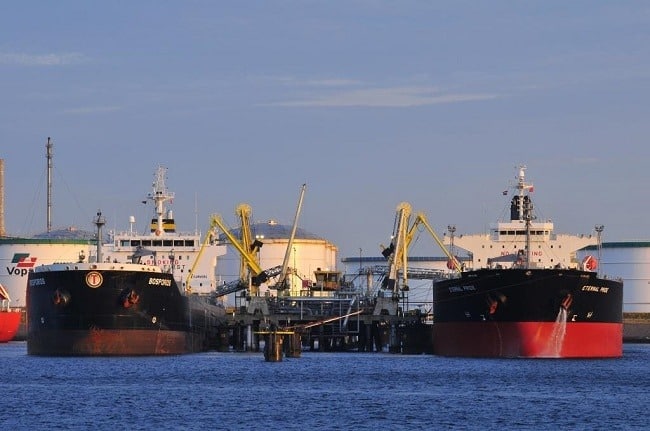 These are known as Fatty Acid Methyl Esters (FAMEs) and are produced by transesterification of vegetable oils or animal fat with an alcohol. Raw ‘FAME’ materials have different chemical compositions and so their blended properties vary, although biodiesel has properties similar to conventional petroleum diesel. Bioethanol is ethanol produced by fermenting products from sugar or starch crops, including sugar cane or beet, corn, wheat or cassava. The blending of products and fuel components into making fuel oil is a fundamental part of the energy business. Gases such as butane and propane are also blended. Ships are often required to blend different cargoes and this has been a regular activity on many trades. The blending is usually for logistical or commercial reasons; such as creating a cargo with another product specification, reconditioning a cargo or adding dyes and additives for commercial or legislative reasons.

There are a number of problems that can arise from blending a cargo and these can include:

• Inadequate mixing of the various products.

• Complications when blend components are incompatible.

• Individual blend components are unstable and result in a precipitation of sediment.

• Commercial liabilities, such as the risk of quality / shortage claims, and ‘Bills of Lading’ problems.

• Tank cleaning difficulties following a blending operation. ‘FAME’ products can be absorbed into the tank walls or pipelines and then later leech into subsequently carried products.

• Individual components are contaminated. Objections to blending on ships were first raised by the Netherlands and UK governments in 2008 when concerns came to light particularly over the blending of bio-fuels onboard ships. New regulations were introduced by the IMO through – SOLAS Chapter VI Regulation VI/5-2 – which prohibits the physical blending of bulk liquid cargoes and production process during the sea voyage as from 1st January, 2014.

1.) The physical blending of bulk liquid cargoes during sea voyages is prohibited. Physical blending refers to the process whereby the ship’s cargo pumps and pipelines are used to internally circulate two or more different cargoes with the intent to achieve a cargo with a new product designation. This prohibition does not preclude the master from undertaking cargo transfers for the safety of the ship or protection of the marine environment.

2.) The prohibition stated in paragraph 1 does not apply to the blending of products for use in the search and exploitation of seabed mineral resources on board ships used to facilitate such operations.

3.) Any production process on board a ship during sea voyages is prohibited. Production processes refer to any deliberate operation whereby a chemical reaction between a ship’s cargo and any other substance or cargo takes place.

4.) The prohibition stated in paragraph 3 does not apply to the production processes of cargoes for use in the search and exploitation of seabed mineral resources on board ships used to facilitate such operations.

Reference should also be made to “Guidelines for the transport and handling of limited amounts of hazardous and noxious liquid substances in bulk in offshore support vessels (IMO resolution A.673(16))”. Further, the 2011 Guidelines for the Carriage of Blends of Petroleum Oil and Biofuels should be referred to as well.

Therefore blending on board ship is the mixing of two products resulting in one single product and reflects only physical mixing as distinct from any chemical processing. Such mixing operations should only be undertaken whilst the ship is within port limits. The physical blending on board of bulk liquid products during a sea voyage to create new products is prohibited.

Before undertaking any on-board blending ship owners and charterers should confirm the arrangement with their flag state or the local coastal and port authority. Although there is industry discussion on the full scope of the regulations, it is clear that “bulk cargoes” includes liquefied gas and cargoes which are not MARPOL regulated. Blending operations at an anchorage en-route may not be permissible, for example, where there are no facilities for a quick response to a spillage. Blending at an anchorage within port limits may be permissible depending upon the local port regulations. This poses the question whether it is permissible under the regulations to ‘blend’ during or prior to an offshore STS (ship to ship) operation. Owners should also seek advice from the relevant authorities and their cargo insurers. Any indemnities issued should always be legally checked.

Although the legislation is well intentioned, its scope is not clear for all situations. With the wide range of possible blended products and the problems that can arise from blending, expert advice should be obtained on product compatibility. BMT Surveys has assisted on a number of incidents following blending operations, whereby severe ‘waxing’ occurred resulting in substantial costs in cleaning cargo tanks and delays to the ship.