Ficaria Seaways, one of the first ro-ro vessels to be fitted with an Alfa Laval PureSOx system, operates inside the stringent European Sulphur Emission Control Area (SECA), on the Gothenburg – Immingham route.

“The installation has prevented a substantial amount of sulphur emissions from entering the atmosphere,” said Poul Woodall, Director Environment and Sustainability, DFDS A/S. 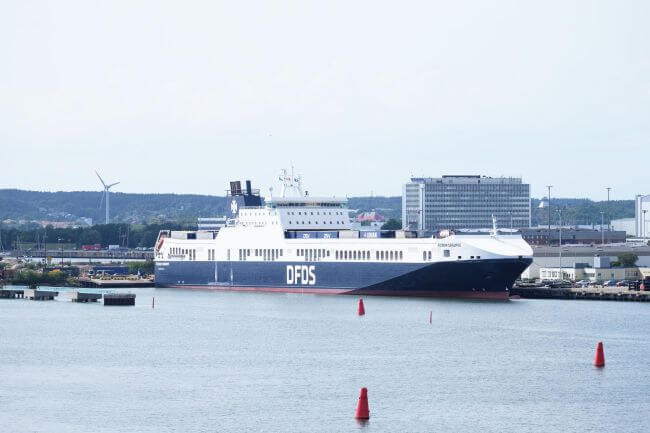 Woodall reports that data from the high sulphur HFO-burning Ficaria Seaways indicates that during the ten-year period just 0.05% of SOx had been emitted. “Had the vessel been trading on compliant fuel during these ten years, then SOx emissions would have been almost 60 times higher,” he said.

Indeed, one of the first major scientific reviews to confirm the environmental performance of the vessel was carried out in 2012 by the Danish Environmental Protection Agency (EPA). The Agency concluded that on average only half the permitted SOx in the SECA was emitted through the scrubber system. Emissions equalled a sulphur content in fuel of 0.05% for the vessel.

Essentially, during the period, Ficaria Seaways emitted 150t less SOx than if it had been operating on compliant 0.10% marine gasoil. The Danish EPA also reported particulate matter (PM) numbers were in the 31-53% range while mass was reduced by up to 55%.

“All in all, some very good statistics for those of us who are concerned about air quality and system performance,” said Woodall.

The operational performance of the scrubber was verified from internal measurements carried out by DFDS, which indicated scrubber downtime of less than 0.002% during the 12-month period to 1st July 2019.

CSA 2020 Executive Director Ian Adams said: “We applaud DFDS, a member of the Alliance, for achieving this significant milestone. As one of the first commercial operators of marine scrubber systems, DFDS has shown that the technology is, without doubt, the safest, most effective way of reducing SOx emissions.”

Since the first installation aboard Ficaria Seaways, DFDS now has the technology aboard 28 vessels with ten more EGCS-operating ships on order. However, Woodall acknowledged that scrubber technology may ultimately give way to other technologies.

“To meet IMO’s ambitious target of 50% reduced greenhouse gas emissions by 2050 (compared to the base year of 2008) the industry must find an alternative to fossil fuel.

“However, until such alternatives are identified and developed for practical use, the current exhaust gas cleaning systems have proven themselves to be reliable, effective means of dramatically improving air emissions without impacting the marine environment, and will continue to exceed the international air quality requirements.in thousands of ships worldwide,” he said.