The Montreal Port Authority (MPA) is pleased to announce that its shore power project has been completed and that vessels docking at the Port of Montreal’s new cruise terminal can now be powered by electricity. This two-pronged project is expected to reduce greenhouse gas (GHG) emissions by 2,800 tonnes per year.

Shore power is a very effective way to reduce air emissions from marine diesel engines. It leads to better ambient air quality by enabling ships to turn off their engines and connect to the power grid for the power they need while they are docked. 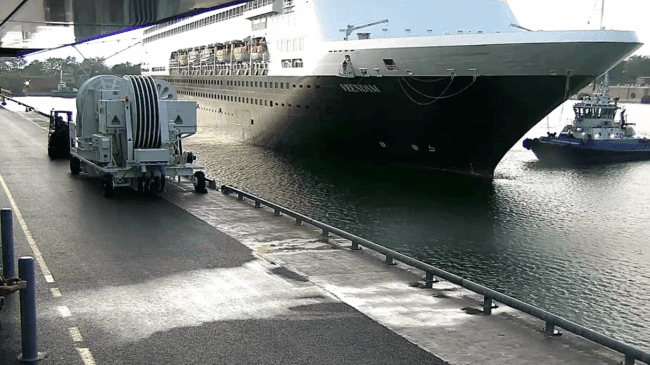 This is the first green initiative of its kind in Quebec. The project was rolled out in two phases. The first was shore power for wintering vessels and the second, for cruise ships. In 2016, the MPA developed four power supply stations at berths 25, 27, 29 and M2 for vessels that winter at the Port.

As part of the rehabilitation of Alexandra Pier and the cruise terminal, the MPA had the necessary equipment installed to provide shore power for cruise ships, working with its technical partners. To provide a sufficiently powerful power supply for cruise ships, Hydro-Québec installed a new 25 kV line to supply the new substation installed at the cruise terminal in 2016. For its part, Schneider Electric designed and built the equipment needed to install the electrical substation. Carried out in 2016 and 2017, these works led on July 29 to the successfully completed, first ever connection to Holland America Line’s cruise ship, the ms Veendam. 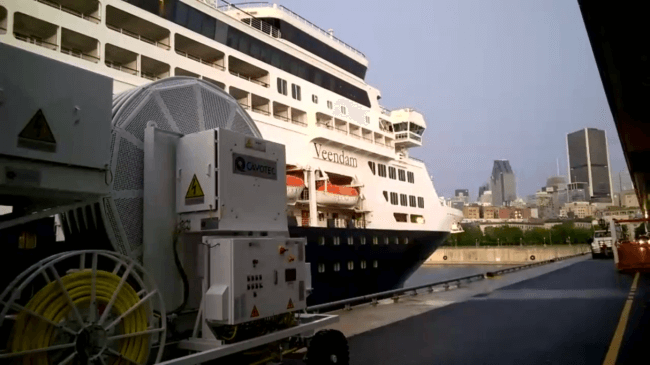 The total project cost was $11 million. The government of Canada is contributing up to $5 million under its Shore Power Technology for Ports Program. The government of Quebec contributed $3 million under its program to improve marine, air and rail transportation efficiency to reduce GHG emissions (PETMAF en matière de réduction des émissions de GES). The MPA, for its part, contributed $3 million to the project.

“The Government of Canada is committed to maintaining a safe, efficient and green transportation system. By taking action to reduce greenhouse gases and air pollution, we are improving the lives of Canadians while investing in the future of cleaner transportation. New and emerging technologies are laying the groundwork for Canada’s present and future economic growth“, said the Honourable Marc Garneau, Minister of Transport.

“This investment, which will make it possible to consolidate the Port of Montreal’s position in the international cruise network, demonstrates the Government of Quebec’s commitment to contribute to Quebec’s economic development, in keeping with the principles of sustainable mobility. In addition to optimizing the energy efficiency of a marine transportation sector, the investment is major backing for implementing a project that benefits the environment. Efforts to reduce greenhouse gas (GHG) emissions under our assistance program are remarkable, both in terms of the resulting GHG reductions and the introduction of new technologies related to marine transportation,” said Laurent Lessard, Quebec Minister of Transport, Sustainable Mobility and Transport Electrification. 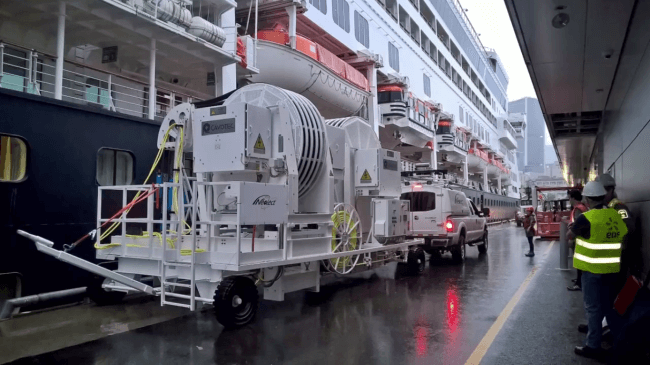 “Working in concert with our various partners and improving air and water quality are among the MPA’s main guidelines for sustainable development. Now completed, this shore power project will result in a significant reduction in greenhouse gas (GHG) emissions, offsetting virtually all the GHG emissions for which the MPA is responsible,” said Sylvie Vachon, President and CEO of the MPA. “I warmly thank the governments of Canada and Quebec for their generous contribution to the project that enables the Port of Montreal to keep providing efficient, modern and improved infrastructures to its clients and to remain a leader in environmental protection.”

“We would like to congratulate the Montreal Port Authority on their initiative to offer cruise ships the opportunity to use shore power when the ship is docked. This is another fine example of the extraordinary potential of our clean renewable energy during the energy transition to transportation electrification,” said David Murray, President of Hydro-Québec Distribution.

“The Montreal Port Authority has demonstrated environmental leadership through the implementation of shore power at the new Cruise Terminal in Old Montreal. Schneider Electric Canada and the Montreal Port Authority can be proud of this innovative and sustainable solution that reduces greenhouse gas emissions and improves the quality of life for port communities and the world at large”, said Juan Macias, President of Schneider Electric Canada.