Crowley Marine Services is deploying the tugboat Veteran in the Port of Los Angeles/Long Beach to provide enhanced docking safety for all vessels, including large petroleum tank vessels with deep drafts greater than 65 feet calling on Long Beach Berth 121. With a bollard pull rating of over 90 short tons, Veteran will be one of the most powerful tugs in the market.

These very large crude carriers are calling more regularly in Long Beach, and Tesoro and the Long Beach Pilots are now requiring a tug with a minimum bollard pull rating of 90 short tons be placed on the stern when assisting these tankers in and out of Berth 121. 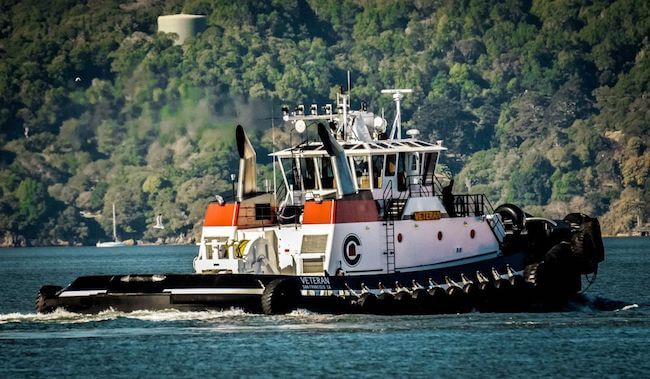 “We are responding to this need by relocating the tug Veteran from San Francisco to Los Angeles/Long Beach Port Complex to replace the tug Goliah,” said Mark Homeyer, Crowley’s general manager of ship assist and tanker escort services. “Veteran will be operated by some of our most experienced and senior crews to provide the highest possible measure of safety and operational excellence.”

Goliah will join the tug Valor, Veteran’s sister tug, in San Francisco. Both Valor and Veteran were designed by Crowley’s naval architecture and marine engineering firm, Jensen Maritime of Seattle.

Having just completed a shipyard period, Goliah is ready to go and better than ever. Her Z-Drives were replaced with larger drives to leverage the increased Tier 3 engine power; the escort winch was replaced with a state-of-the-art render recovery winch; fendering was upgraded, and her bollard pull was increased to over 70 short tons.

“The Goliah has always been one of the most capable offshore towing tugs on the West Coast,” said Homeyer. “With these improvements, she will be an even more stout and capable tug for harbor assist, tanker escort and offshore rescue work in the Bay Area.”

“Ultimately these changes will provide our shipping customers with the best tug capabilities in these major California markets – from a ship assist, tanker escort and emergency rescue perspective,” he said. “These improvements are indicative of our commitment to be the first choice for the safest and highest quality service provided by exceptional people.”

Crowley owns and operates one of the most advanced fleets of ship assist and tanker escort tugs in North America. These vessels operate along the U.S. West Coast and Alaska and assist the largest ships through some of the tightest waterways in the world. Crowley entered the ship assist business at the start of the 20th century, operating steam-powered tugs in San Francisco Bay in 1906. Though much has changed, the company’s commitment to safety and to protecting the environment has remained constant.