Lloyd’s List acknowledges the captain and crew on board the Monjasa controlled vessel M/T Accra as Seafarer of the Year 2016. Here is the important rescue operation off East Africa, which went ahead of the award.

In the early morning of 4 July, during passage of the Mozambique Channel, the Monjasa controlled vessel M/T Accra picked up a mayday call on the radio and observed distress rockets fired from the vessel MS Fiona – a small offshore vessel (length overall 35 meters) with a five men crew on board. 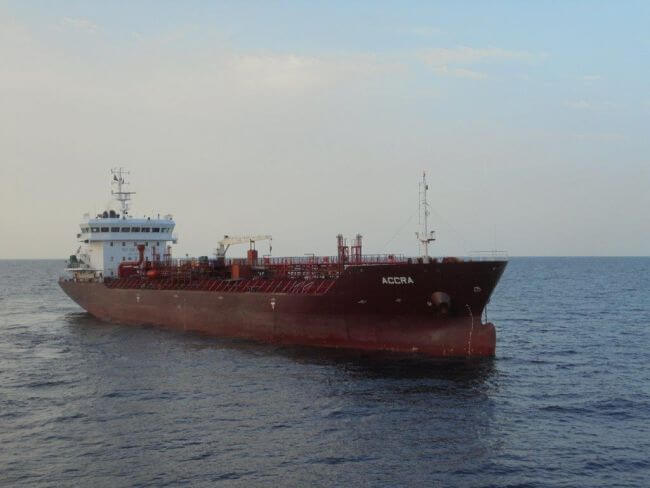 As expected by any vessel at sea, M/T Accra immediately took action and it was soon established that MS Fiona had experienced a total blackout with no power available, no long distance communication and no propulsion. The small vessel had been drifting for 24 hours and the crew was obviously very happy to see M/T Accra.

For a small vessel drifting – strong winds and 3-4 meter waves form a very dangerous and life threatening situation and hence planning was commenced on how to best protect the five people on board.

Plans were made in close coordination with Monjasa’s technical ship management company Montec – both for setting up emergency towing but also for evacuating the five crewmembers to M/T Accra if this should prove necessary.

M/T Accra stayed at the position for almost 48 hours and apart from providing moral support they served as communication to both Montec, Monjasa and the managers of MS Fiona. Furthermore, they managed to pass hot meals to crewmembers on the distressed vessel.

Eventually, on early 6 July, a fishing vessel arrived at the scene with batteries and tools from shore and M/S Fiona managed to regain power and propulsion. Only at that time, M/T Accra was able to continue her voyage.

Monjasa’s shipping department wishes to salute the captain and crew on M/T Accra for handling the situation perfectly and in a very professional manner. Clearly, their actions made a huge difference and seeing a successful conclusion to a serious situation like this makes it well worth all the efforts.