The International Transport Workers’ Federation (ITF) has slammed government inaction to alleviate the crew change crisis, declaring that current COVID-19 border and travel restrictions risk creating an epidemic of forced labor and modern slavery as seafarers are increasingly forced to stay onboard working against their will.

ITF General Secretary Stephen Cotton said the world’s 1.65 million seafarers have been let down by the world’s governments who had allowed the crew change crisis to deepen and reach a six-month mark on World Maritime Day – 24 September 2020.

It is estimated that there are now 400,000 seafarers trapped working aboard vessels, and an equal number unemployed at home and unable to relieve them. 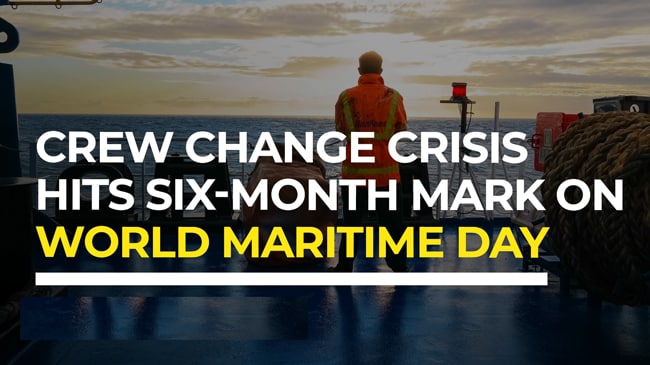 Cotton said “It is deeply shameful that we have reached the unfortunate six-month mark in this crisis, with no end in sight. By not giving seafarers pragmatic exemptions as key workers to get to and from ships, governments are consigning seafarers to being slaves on what many call their ‘floating prisons’.”

Stephen Cotton said the ITF had been working with major corporations who were deeply concerned about the risks to their supply chain if seafarers cannot be changed and relieved by the fresh crew.

“This week we released an important expert report that shows the crew change crisis is injecting too much risk into the global shipping industry. Unless we get these increasingly fatigued seafarers off, there will be more accidents – there will be oil spills on our shores and deaths on our seas.”

“I acknowledge the leadership of Unilever and other corporations for taking responsibility for the health and wellbeing of seafarers in their supply chains and calling on governments to wake up to this escalating crisis.”

“The situation is bordering on or amounts to forced labor, and all companies have a responsibility to use their leverage to demand urgent government intervention to end this crisis whilst ensuring that their supply chains are free of adverse human rights impacts on seafarers.”

“Today is World Maritime Day – a day when we should be celebrating the contribution of our industries and humbly reflecting in the thanks of a public who saw seafarers, dockers, fishers and others in our industries step up and make a difference during this pandemic,” said Heindel. “Instead, World Maritime Day 2020 has been marred by the deepening of this humanitarian, economic, environmental and human rights crisis.”

“If governments want to celebrate seafarers’ contribution to their economies, and if they really want to support the sustainability of the shipping industry – then they need to get to work, just as we do every day at sea, and do everything they can to get these worn out seafarers home, replaced by fresh crews, and ensure these heroes are afforded the dignity and respect that they deserve.”

“Seafarers are tired, they’re fatigued and rapidly becoming disillusioned with their choice to work at sea – and they’re worried they’ll be made to pay for the inevitable accidents that come from pushing a workforce passed their physical and mental limits.”

“There are now well over 400,000 seafarers who are working beyond their initial contracts. There are more and more who have been on board for longer than a year. We refuse to let this become the new norm. Every human has a right to refuse a contract, to stop working and to go home – and we’ll be working with responsible companies, our affiliates and seafarers themselves to see these rights enforced,” concluded Heindel.