The first 30 hectares of Offshore Center Rotterdam have been completed. PUMA, a project organisation created by a partnership between Dutch hydraulic engineering firms Koninklijke Boskalis Westminster NV and Van Oord NV that focuses specifically on the expansion of the Maasvlakte site, processed 6 million m3 of sand in four months to complete the work. Only 2 million m3 of sand are now needed to raise the other 40 hectares to the required level. There is considerable interest in the centre. The Port of Rotterdam expects the first companies to establish themselves on the site in 2019.

The creation of Offshore Center Rotterdam is in keeping with the Port of Rotterdam’s policy of further developing what is already a highly developed group of Rotterdam-based companies in the offshore and maritime industry. 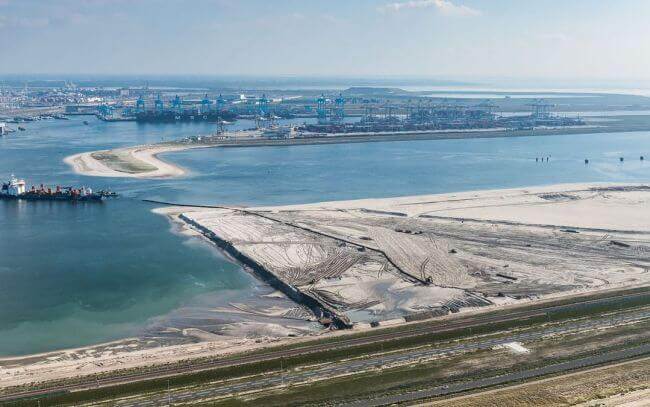 Rotterdam has traditionally been a leading port for the maritime industry, in which approximately 900 companies are active. That position is based on the shipbuilding and oil and gas sectors. Offshore has been a prime focus of the Port of Rotterdam’s policy for some time now, wind energy and decommissioning being key areas of this policy. Results of the policy include the completion of Pioneering Spirit and the formation of Sif, a company that specialises in producing foundations for wind turbines.

In this connection, a number of Rotterdam-based companies signed the ‘Rotterdam Offshore Wind Coalition’ manifesto last year. In addition, the Port of Rotterdam and the Rotterdam Port Promotion Council are facilitating the Rotterdam Offshore Community, the purpose of which is to establish connections between companies within the offshore community and thereby encourage cooperation, the sharing of knowledge and business transactions both within and outside the community. Developing Offshore Center Rotterdam is a subsequent step.