Transhipment in the seaports in the North Sea Canal region – Amsterdam, IJmuiden, Beverwijk and Zaanstad – fell by 10.7% to 48.7 million tonnes (2019: 54.6 million) in the first six months of this year. The impact of the global coronavirus crisis on the transshipment figures is clear.

Transshipment also fell in the port of Amsterdam during the first six months of 2020. The volume declined from 45.2 million tonnes in the first half of 2019 to 39.8 million tonnes this year (-12%). This drop was also clearly a result of the coronavirus pandemic.

Koen Overtoom, CEO of Port of Amsterdam, says, “For the first time in years we have seen a reduction in the transshipment in our port, and it is a significant one. However, we are not pessimistic. In the first half of the year, we have shown in difficult conditions how crucial the port is for the region and for the country. As vital infrastructure, we have continued to manage shipping traffic and to handle cargo flows, without letup . We have thereby contributed to keeping the country and the economy running.” 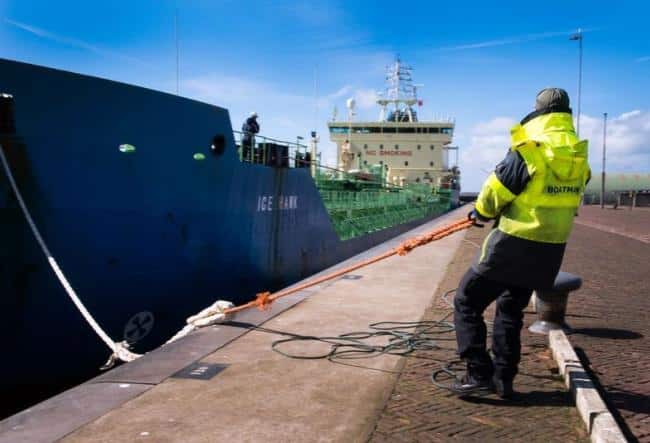 “Our distribution clients in particular have had a strong six months, with the distribution of foodstuffs and packages. The market for transport fuels (petrol, kerosene etc.) is now recovering. It is hard to say what the second half of the year will look like. The fuels market is too fickle for that, and the impact of the coronavirus is uncertain. We do anticipate that in the current conditions the shortfall in volume for the year as a whole, will remain limited to the level that we have seen in the first six months,” says Overtoom.

The decline in Amsterdam in the first six months was attributable to both liquid and dry bulk and containers. The transshipment of liquid bulk (mainly transport fuels) fell by 5.1% to 24.7 million tonnes, compared to 26 million tonnes over the same period last year. Despite decreased aviation and road traffic, the volumes of transport fuels remained relatively constant. This is due to the fluctuating market for these cargo flows, which results in constant movement.

The volume of dry bulk fell by 21.2%, which was in particular due to a substantial decline in coal to 4.6 million tonnes, compared to 8.2 million tonnes last year (-43.6%). The unexpected, non-structural growth last year amplified the decline in coal volume this year. The transshipment of grains also fell (-15.4%), and there was a reduction in break bulk (-18.2%).

Container transshipment fell by 31.6%.This cargo flow had grown steadily in recent years, partly as a result of the focus of the port of Amsterdam on short-sea lines. The decline can therefore also be attributed to the coronavirus, which resulted in scheduled services being partly suspended.

Varied picture across the region