COSCO SHIPPING Ports Limited (”COSCO SHIPPING Ports” or “CSP”), a leading ports operator in the world, today announced that the Company has won the title of the “Best Port Operator 2018” awarded by International Business Magazine.

This is the first time the Company won the award. In July 2018, the Company has won the “Most Innovative Port Operator” by International Finance. The Company’s excellent operation has been highly recognized by the market. Since the corporate restructure completed in 2016, COSCO SHIPPING Ports has been committed to building a global terminal network, leveraging its synergies with its parent company and OCEAN Alliance to further strengthen the Company’s position as a leading global ports operator.

The Year 2018 is the second operational year after the Company’s restructuring. COSCO SHIPPING Ports has achieved outstanding performance in terms of operational results, extending global terminal network, and strengthening the terminals’ operational capabilities. Total throughput of the Company, excluding Qingdao Port International, increased by 11.9% year-on-year for the 11 months of 2018; and the throughput of its subsidiaries increased significantly by 31.2% year-on-year. 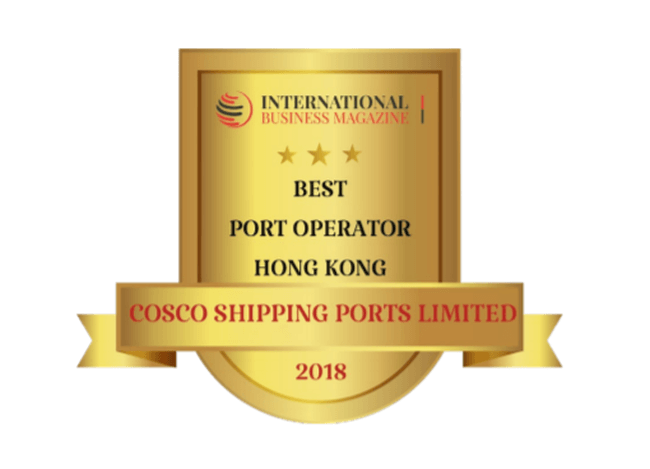 COSCO SHIPPING Ports completed the acquisition of Noatum and Zeebrugge in 2017 to further strengthen its terminal portfolio in Europe. In June 2018, Nantong Tonghai Terminal officially commenced operation, further optimizing terminal network in Yangtze River Delta. In November, the Company and PSA
Corporation Limited signed a memorandum of understanding for the addition of two new berths at the COSCO-PSA Terminal (“CPT”) in Singapore, with an aim to enhancing CPT’s role as a major transhipment hub in Southeast Asia. The annual handling capacity of CPT has increased from 3 million TEU to about 5 million TEU. In December, COSCO SHIPPING Ports inaugurated CSP Abu Dhabi Terminal, which is the first overseas Greenfield subsidiary of the Company; the terminal will be a major hub port of the Company in the Middle East.

Since the restructuring in 2016, COSCO SHIPPING Ports has adopted “The Ports for ALL” as its mission and is working towards building a global terminal network with controlling stake that offers linkage effects on costs, services and synergies, a synergistic platform that offers mutual benefits to all in the shipping industry.

Mr. Zhang Wei, Vice Chairman and Managing Director of COSCO SHIPPING Ports, said: “We are honoured and proud to win the award. This is a fantastic endorsement of what COSCO SHIPPING Ports has achieved over the last two years, and also in recognition of our efforts and commitment to be “the ports for all people”. Looking forward into 2019, COSCO SHIPPING Ports will continue to improve the efficiency of the terminals, strengthen the service capabilities for shipping alliances, and strive to build a global terminal network, connect global routes and become truly “the ports for all people”.