The cargo ferry will be joined by a sister ship, Seaspan Reliant, in early 2017, after which the operator will order a further three ferries, according to Seaspan CEO Jonathan Whitworth. The 148m vessels, designed by Vard Marine, will have capacity for 59 truck trailers compared to the 30-40 trailer capacity of its existing seven vessels that have been in service for an average of 36 years. 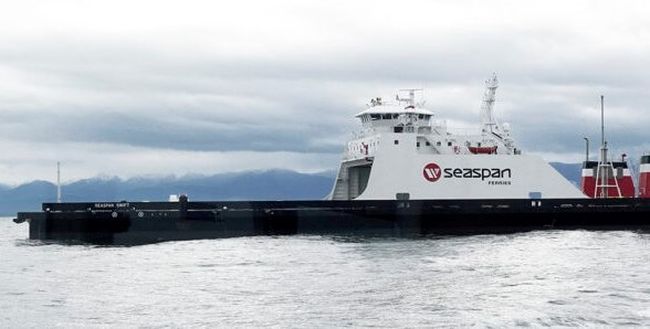 Seaspan Ferries operates cargo-only services between Vancouver Island and the British Columbian mainland, carrying up to 800 trailers a day. The company delivers more than 50% of all products consumed on the island.

“We are proud to be working with Seaspan, a fellow Canadian company and an innovator in its business operations” said Andrew Morden, President and CEO of Corvus Energy. “Seaspan’s commitment to environmental sustainability is industry-leading and Corvus looks forward to working with them to integrate Corvus Energy ESS solutions into their future vessels.”

“Integrating the proven Corvus ESS technology into our new LNG-battery vessels will help us achieve our goal of minimizing the environmental impact of our operations, while reducing fuel consumption and operating costs,” said Jonathan Witworth, CEO Seaspan. “Corvus’ experience, industry leadership and safety record made it an easy decision to utilize their battery systems.”