You are here: Home › Shipping News › Containership Fleet On The Brink To Break Through The 20 Million TEU Barrier
TwitterFacebookLinkedInPinterestBuffer

BIMCO expects the container shipping fleet to break through the 20 million TEU barrier shortly. 2016 will see the lowest fleet growth rate on record (3.4% expected), but with an estimated net addition of 0.68 million TEU of capacity for the full year, the milestone could be reached in June.

However, the fleet grew unevenly, displaying a shift to larger ship sizes and giving a one-sided focus on cutting unit costs per transported TEU by having larger ships; continuing the theme of “bigger is better”.

The ultra large containership segment (ULCS) especially contributed to the growth; starting at 0.5% in 2007 and currently accounts for 18% of the total fleet – as measured by TEU capacities.
Chief Shipping Analyst Peter Sand says: “The total containership fleet in TEU increased annually from 2006 onwards by 9%, in contrast to the number of ships which actually increased by only 3.7% on an annual basis. Despite the enormous growth of ULCS market share, the post-panamax fleet of 8,000 TEUs – 12,000 TEUs in relation to the total share and TEU capacity, is still the preferred shipping class, accounting for around ¼ of the container ship fleet.” 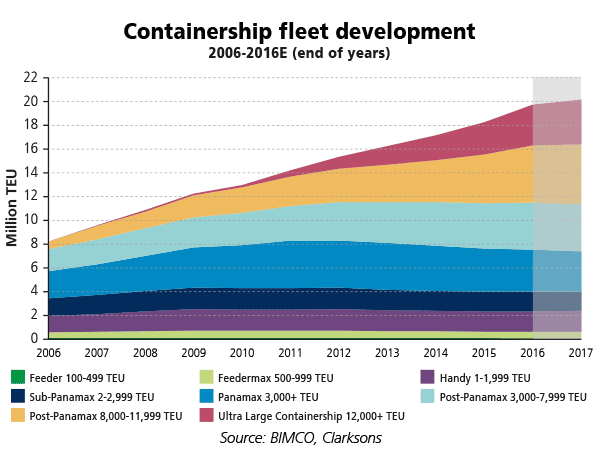 Striking differences are revealed when comparing the annual growth rate for the time frames 2006 – 2016 and 2011 – 2016. While the feeder class with less than 500 TEUs per ship, decreased by an average 4% per annum in relation to the time frame 2006 – 2016, the decline accelerated even further by an additional 1% in the last five years. 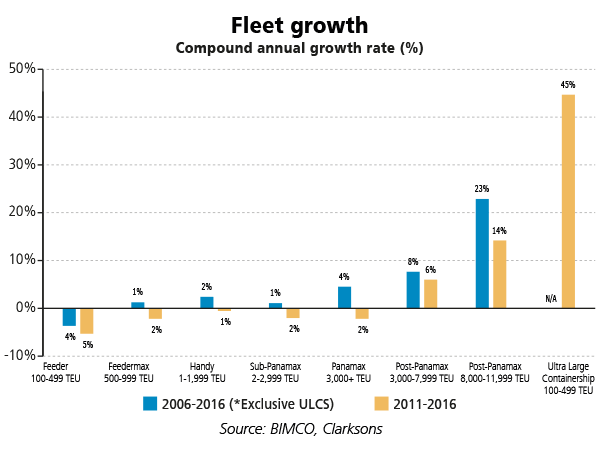 The figure which stands out the most is the tremendous annual growth of 45% between 2011 and 2016 of the ULCS (12,000 TEUs). Thus backing up the trend towards larger capacity container ships.

Peter Sand adds,” The trend towards higher capacity container ships stands out during the 2006 – 2016 period and even accelerated in the last five years. Therefore, the driver towards the 20 million TEU margin was ultra large containerships and post-panamax between 8,000 TEUs – 12,000 TEUs“.