In the first three quarters of 2018, total throughput in the port of Rotterdam was 0.4% lower than in the same period the previous year.

Container volumes continued to grow at a markedly higher pace than the first nine months of 2017 – even recording a new all-time high in August. Wet and dry bulk, however, showed a decline in volume – although LNG and biomass were two positive outliers within these product segments.

All in all, 350 million tonnes of cargo was handled in the port of Rotterdam, a decrease of 1.5 million tonnes compared to last year. The port expects to make up some of the difference in the fourth quarter, so that the throughput recorded for 2018 in its entirety will be more or less equal to that of 2017. 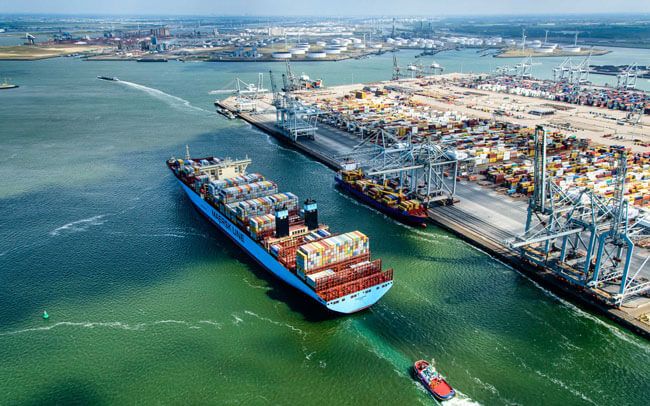 Allard Castelein, CEO of the Port of Rotterdam Authority: “The underlying shift in throughput figures that was observed in preceding quarters is continuing as expected. I am happy to see that the healthy growth in the Containers segment – one of the Port Authority’s spearheads – shows no signs of slowing down. In view of the present energy transition and the targets set out in the Paris Agreement, a gradual contraction in the fossil fuels segment seems inevitable. This development creates new scope for growth in the LNG and biofuels segments – as borne out once again by this quarter’s figures.”

Containers
In 2018, container throughput also increased significantly – by 5.7% (in TEU) compared to the previous year. This resulted in a total volume of 10,780,204 TEU. The strongest increase was recorded in the first seven months, with August 2018 setting a new record with 136,500 tonnes.

Growth rates in the first nine months of 2018 differ from trade route to trade route: along the Asia-Europe trade lane, the volume of incoming loaded containers rose by 10%, while outbound volumes decreased by 7.6%. Overall throughput on the North American trade lane increased by almost 10%, and handling for the South American lane even rose by over 20%.

Liquid bulk
Liquid bulk throughput fell by over 1%. Crude oil in particular was affected by lower refinery production levels in Germany and Belgium, as well as downtime for maintenance at refining

The throughput of mineral oil products handled in Rotterdam in the first nine months of 2018 fell by 1.5% compared to last year. This could mainly be attributed to the decreased handling of fuel oil, which in turn was a result of reduced trading with Singapore. In contrast, other oil products like diesel and petrol actually showed an increase in the same period.
The volume of LNG handled in Rotterdam continued to grow at an impressive pace. September 2018 was a record month, with a total throughput of close to 0.8 million tonnes. This increase was mainly the outcome of the on-going intake of LNG transported by small carrier vessels to Rotterdam from the Yamal peninsula in Russia. In Rotterdam, these shipments are transferred to large LNG carriers and forwarded to other destinations around the world.

Dry bulk
Total dry bulk throughput fell by 7.3% compared to the first three quarters of 2017. The strongest decrease could be observed in the agribulk and iron ore segments. The total volume of agribulk handled was clearly lower than last year (-18%). This can be attributed to a number of factors, including less inbound shipments from South America due to poor harvests. In addition, lower wheat prices meant that Europeans consumed more locally produced wheat – resulting in fewer inbound shipments.

Ore intakes were mainly lower in the first six months of 2018. Including the third quarter, the tally in this segment falls almost 6% short compared to the same period last year. However, intake is expected to pick up in the months ahead against the background of increased European steel production combined with low local ore reserves.

Coal throughput fell by 4.6% compared to last year. The demand for fuel coal decreased as a result of the extraordinarily warm summer, the rising price of CO2 emission allowances and further growth in the renewable energy segment. On the other hand, the port did see a higher intake of industrial coke to fuel the increase in steel production.

Breakbulk
In the period under review, Roll on/Roll Off (ro/ro) throughput volumes rose by 1.3% compared to last year. There was no increase in trading volumes on ro/ro services to and from the UK due to the local economic downturn as a result of on-going uncertainty about Brexit. On the other hand, the volume of cargo transported via ro/ro services to the Iberian Peninsula did increase.
The volume of breakbulk handled in Rotterdam recorded its strongest decrease in the first quarter of 2018. As a result, volumes recorded until the end of September still fell 6.5% short of the total recorded for the same period last year. Nevertheless, by the third quarter it had become clear that volumes had stabilised again.