Hamburger Hafen und Logistik AG (HHLA) increases efforts to improve the city’s air quality. Container transporters powered by lithium-ion batteries will move the containers at HHLA Container Terminal Alternwerder (CTA) between ships and the yard in future. The use of green energy prevents any CO₂, nitric oxide or particulate matter from being emitted and the vehicles are also three times more efficient than their diesel-powered predecessors. Another benefit is that during their time at the charging station, the container transporters can contribute to the stabilisation of the grid by precisely extracting or feeding energy. The Ministry of Environment and Energy will provide funding worth approximately € 8 million from the European Regional Development Fund (ERDF) for HHLA’s innovative energy transition project. Jens Kerstan, Hamburg’s Minister of Environment, presented HHLA’s Chairwoman of the Executive Board, Angela Titzrath, with the funding on Monday, 16 April 2018.

Jens Kerstan, the Free and Hanseatic City of Hamburg’s Minister of Environment and Energy: “HHLA is implementing an exciting project in Altenwerder that will have three positive effects from the outset: It saves CO₂ and thus helps protect the environment, it reduces nitric oxide emissions, which in turn reduces air pollution, and, to top it all off, it serves as a flexible storage solution therefore further advancing the energy transition. The proportion of renewable energy in the grid fluctuates depending on the amount of sunshine and wind strength which is why we need innovative technical solutions for interim storage and flexible energy consumption. HHLA is clearly showing how this can work and we are therefore supporting this project with approximately € 8 million. The energy transition is only possible if all actors and components in the energy system are linked intelligently with the help of digital processes.” 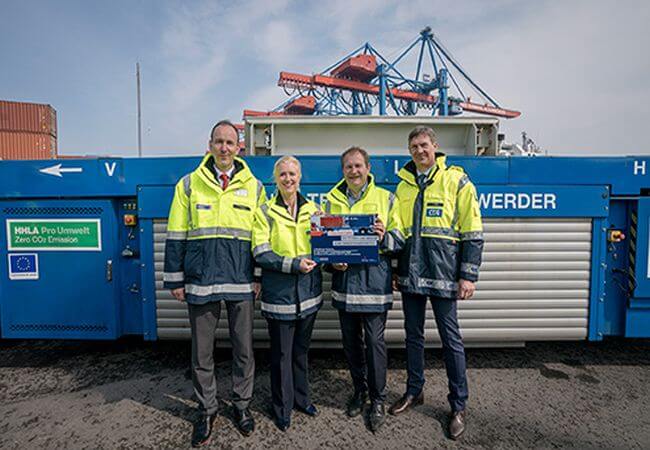 Angela Titzrath, Chairwoman of HHLA’s Executive Board: “With the high level of automation at CTA, the terminal is already leading the way for container handling of the future. HHLA is making yet another contribution to the Ministry’s air purification plan by using container transporters powered by lithium-ion batteries. HHLA takes its responsibility to protect the climate and reduce noise pollution in the Port of Hamburg, and has been implementing measures for efficient and sustainable container handling for many years. The self-imposed target to reduce CO₂ emissions per container by 30 percent compared to 2008 has been achieved ahead of time. We will now set ourselves new targets, combining entrepreneurial vision, social responsibility and the sustainable use of resources.”

A lithium-ion battery-powered automatic container transporter (automated guided vehicle, or AGV) prototype has been in operation at the CTA since autumn 2016 and was successfully tested together with an electric charging station. Thanks to a fully automated loading arm, the AGV will be supplied with the green energy used at the CTA. Six of these charging stations have already been installed at Altenwerder. Over the coming weeks, 25 lithium-ion battery-powered AGVs will go into operation at the CTA. By the end of 2022, the fleet of almost 100 AGVs will be completely switched over to lithium-ion battery drive and a total of 18 charging stations will be installed. This will result in an annual reduction in emissions of approximately 15,500 tonnes of CO₂ and around 118 tonnes of nitrogen oxide.

From an economic point of view, the ratio of energy consumed to actual power output for lithium-ion battery-powered AGVs is three times higher than that of diesel AGVs. Further advantages of the batteries include the charging time, which is just one and a half hours, and their high durability. And they weigh less than lead batteries, bringing the weight down from twelve to four tonnes. Lithium-ion batteries also do not require any upkeep, unlike lead acid batteries. This reduces costs and down times resulting from maintenance work.

A sophisticated system: If, for example, the container transporters are at the charging stations and there is no wind over the North Sea, software will signal that the batteries should feed energy back into the grid in order to immediately balance out the resulting gap between the generation and consumption of energy. If the offshore wind turbines are turning particularly fast, however, while lots of solar energy is being generated in the north, the batteries will receive a signal to begin charging. This allows HHLA to offer the container transporters as flexible power storage units with an output of approximately 2 megawatts on the energy market, using intelligent interconnectivity. Since the lithium-ion batteries take in and give out electricity within seconds, they contribute to the necessary stabilisation of the grid frequency. Many people realised just how important stable grid frequency is over the last few weeks when their radio alarm clocks and microwave clocks slowed down due to frequency fluctuations.

Damaged Destroyer USS Fitzgerald Heading To The U.S. For Repairs

New Infographics To Boost Psychological Wellbeing At Sea
Want to share your tips and advice? Got questions? Visit the community forum to ask questions, get answers, meet people, and share your tips!