Having experienced falling freight rates from August to year-end in 2017, most liner companies were successful in pushing rates higher in early January 2018. Remarkably, most of them managed to hold onto most of the gains they achieved, considering October and November were challenging in terms of very low demand growth. The weak demand came from the Far East to Europe trade, and on the Intra-Asian transport.

Liners were the most successful at maintaining higher freight rates on the US-bound trade lanes, both east and west coast. On the other high-volume trades into the Mediterranean and North Europe, the announced General Rate Increases (GRI) lifted freight rates too, but to a smaller extent. 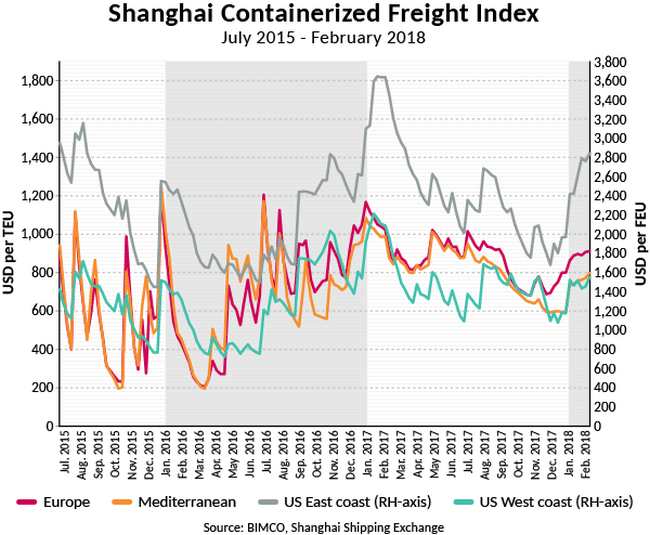 Liners always push for higher freight rates going into January. But, as fleet growth had overtaken demand by a large margin in the latter third of 2017, rates had been falling for six months going into January. Nevertheless, exports ahead of Chinese New Year in mid-February 2018, boosted demand to such an extent that rates into the US East Coast went up at the start of January 2018 and kept rising.

We always focus a lot on the front hauls – for good reason. Cargoes on the back hauls often only provide a bit of revenue to cover some of the costs of bringing the containership back to the Far East for another profitable pay load.

On 1 January 2018, a Chinese ban on specific imports came into effect. The ban covers the import of 24 types of waste – including waste paper and waste plastics. Commodity categories like “ores and scrap”, “pulp & waste paper” and “plastics in primary forms” often feature now amongst the top 5 commodities on many trades, with Asian-bound trades dominating.

At least for a while, the ban has turned the attention of industry and shippers back to the back-haul cargoes.

On the trade from North America to Asia, the number one commodity – by a margin – is “pulp & waste paper” accounting for 1.46m TEU in 2017 (source: MDST), with an estimated global total of 4-5m TEU that could be affected by the Chinese ban (source: Drewry). The volumes are not expected to be an outright loss. Much of the affected cargo seems to be heading for Indonesia, Taiwan and Vietnam. However, not all this type of cargo can expect to land there, as the now “unavailable” waste handling capacity in China is much bigger than the other waste handling facilities in the Far East combined.

The containership fleet has already expanded by 1.2% in the first month of 2018 – equal to the entire fleet expansion of 2016. 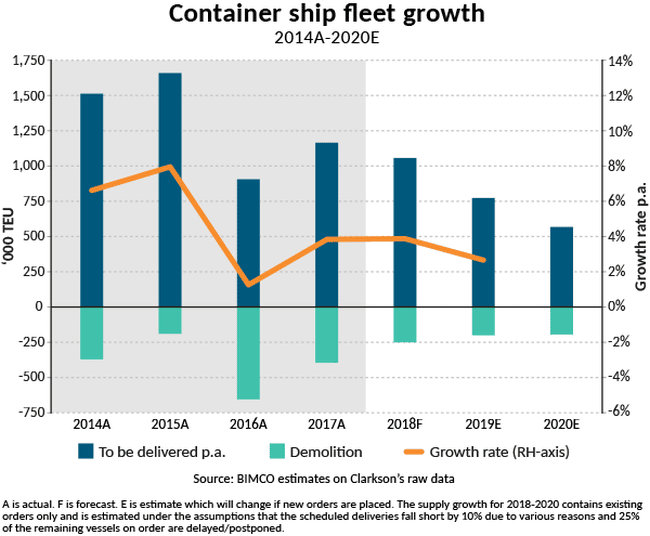 New orders are also being placed at an increasing pace. The break in ordering from December 2015 through August 2017 was one to cherish.

The idle containership fleet has almost disappeared. Alphaliner counts only 65 ships on their list with a combined capacity of 191,441 TEU as of 5 February 2018. In real terms, this means that nominal fleet growth will have a bigger effect on the market balance, as the temporary idling and re-activation of ships becomes negligible.

Owners and investors were busy in the second-hand market in 2017. In fact, it was the busiest year on record. 297 ships changed hands, valued at USD 4,178m (source: VesselsValue). Panamax ships were in demand, more due to price than anything else – with 93 ships changing hands in total. Purchasing prices were equal to the demolition values of many of the ships, meaning there was little downside risk from the purchase. Since mid-2017 both demolition prices and second-hand values have gone up. 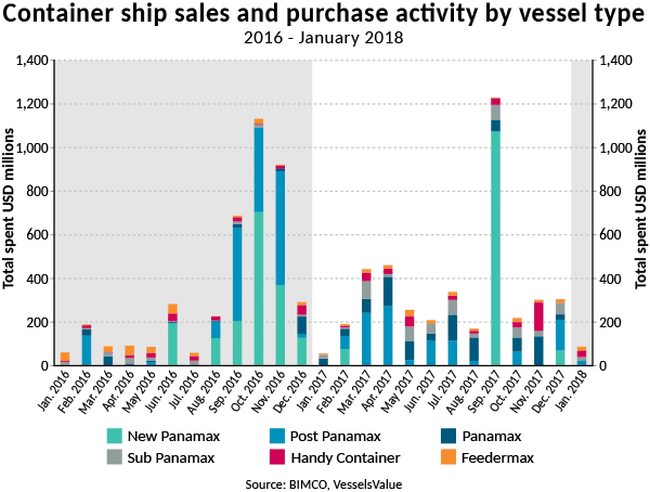 The fact that demand growth slowed down towards the end of 2017 is also clear from the development in time charter rates, which peaked twice last year, around April/May and around mid-September 2017. Nevertheless, the upward trend was an encouraging one, as the dip following the second peak was not as low as the previous dip. For a 6,500 TEU ship, that development took time charter rates from USD 14,500 per day in April 2017, down to USD 10,000 per day in June and back up to USD 16,250 per day in September 2017. By early-February the rate was at USD 14,000 per day again. In all aspects time charter rates were mostly lossmaking – but 2017 did deliver considerably higher rates in comparison to the absolute lows of 2016. 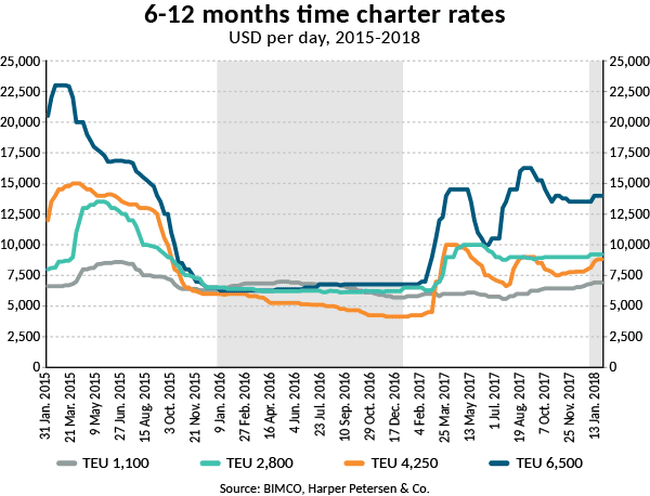 What will the future bring? Overall demand growth is expected to be lower than in 2017, but still high enough to potentially improve the fundamental market balance. BIMCO forecasts demand to grow by 4.0-4.5% against a fleet growth of 3.9% in 2018. The IMF January update of its World Economic Outlook, significantly lifted expected GDP growth in advanced economies for 2018 and 2019, and growth in advanced economies is generally good for container shipping demand.

Watch out for the North American inbound loaded containers where we expect a change in 2018. We saw very strong growth in 2016 and 2017 for the US West Coast imports and in 2015 and 2017 for the US East Coast imports. We have yet to see the full effect of the elevated Bayonne Bridge allowing ultra-large containerships to pass and enter the New York/New Jersey (NYNJ) port. Loaded containerised imports into NYNJ were up by 6.0% for the full year of 2017 compared with the year before.

For the whole of the US East Coast in 2017, the amount of inbound loaded containers grew by 10.1%. It took the industry a while to embrace the expanded Panama Canal locks – but they are making use of them now. 2018 is likely to be the year where many container line networks calling the US East Coast will become fully up-scaled by deploying ultra large container ships.