Despite positive growth momentum, the container shipping industry continues to suffer new, big ship deliveries with no let-up to the ordering frenzy according to the Container Forecaster, published by Drewry Maritime Research.

Drewry forecasts another year of excess growth in relation to demand in 2015. This will make it harder for carriers to repeat the estimated 92% load factors across the main headhaul East-West trade lanes achieved in 2014.

New orders for Ultra Large Container vessels of at least 18,000 teu are pushing back the date when supply and demand can be expected to meet and at the individual trade route level this is now seemingly unachievable. There have been around 40 ULCVs ordered since January, mainly for 2017 delivery and this does not include any provision for Maersk and Cosco orders yet to be finalised. 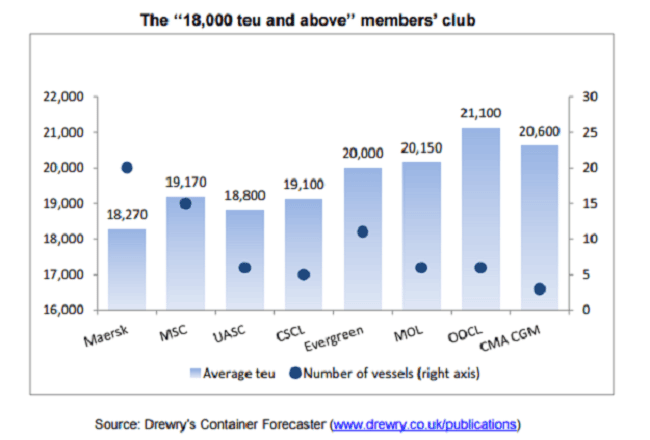 “The industry paid a heavy price for the huge ordering it undertook in 2006/07 and it seems that four years after Maersk spent $3.8 billion on its Triple Es, history is repeating and many lines are entering or are about to enter this now not so exclusive club. The one difference this time around is that the operational agreements should mean that not all top 20 lines will make this big step”, comments Neil Dekker, director of container research at Drewry.

One positive for the industry is the recent resolution on the US West Coast between the PMA and the ILWU. However, our estimates are that it cost a combined $150 million during the last three months of 2014, without taking into account the associated supply chain impact, which cannot necessarily be measured in dollars.

The 30% fall in bunker prices has also been an unexpected boon, but most carriers still recorded lower average freight rates last year. Irrespective of lower BAFs, why did the strong load factors not align with improving freight rates given the constant monthly GRIs from the carriers? This shows there is still a disconnect in the industry and the most recent indicators in 2015 highlight that spot freight rates are in serious decline. The trade route balances remain very fragile. Current spot rates of $1,000 per feu from Asia to North Europe are below break-even levels for the carriers and consistent declines over the last ten weeks will concern volume shippers that have signed up for higher contract rates this year.

The Chinese New Year period always tends to skew volume comparisons, but the delivery of over 60 ULCVs this year with an average nominal capacity of over 15,000 teu will cause a headache for trade route managers. The underperformance of the trades to East Coast South America is another concern for the global cascade of vessels over 8,000 teu.

“The decision by Maersk and MSC to downgrade the average size of ships on one of their European strings to the East Coast of South America from 9,000 teu to 5,500 teu may not seem particularly important in the grand scheme of things. But all ocean carriers have argued that deploying new and big ships across every trade route is strategically critical. This is the first sign that on routes where trade growth is weak, the lower slot cost per unit argument is simply not enough because freight rates dive to well below sub-economic levels”, highlights Dekker.