The improvement witnessed in September was the largest month-on-month rise since March 2015, driven by greater reliability in the Transpacific and Asia-Europe trades that more than offset a lower on-time result in the Transatlantic.

The on-time average of Transpacific services rose by 11.7 points to 78.6%, the best performance recorded for the trade since the start of the data series in May 2014. Compared to September 2014, reliability for the Transpacific is up by 13.2 points. In the Asia-Europe trade, reliability improved by 4.3 points against the previous month to a second-best monthly performance of 81.2%. Year-on-year Asia-Europe reliability is up by a huge margin of 21.3 points. 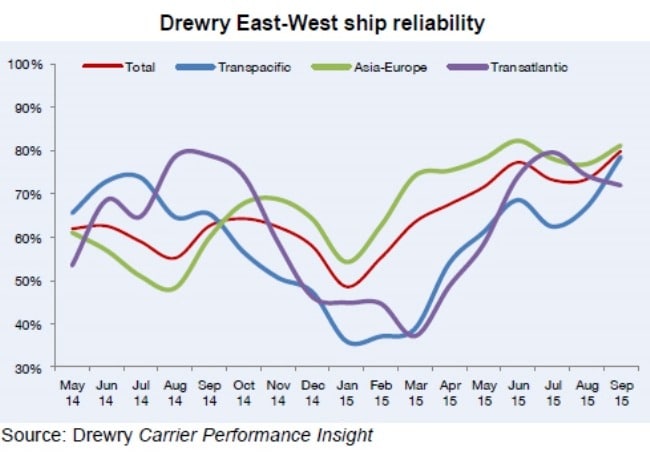 The only negative for the month was the performance of services in the Transatlantic route, which slipped by 2.3 points month-on-month to 72.0% in September. The annual comparison for the trade is also unfavourable, down by 6.9 points.

After a two-month break Maersk Line returned to the top of the carrier reliability rankings in September with an on-time average across the three trades of 86.9%. The Danish mega-carrier has claimed top spot in 15 out of the last 17 months. A further sign of the overall improvement in reliability spreading across the industry is that eight of the 19 carriers tracked achieved a reliability rating of over 80%.

“The steady improvement in reliability seen through 2015 is very welcome news for shippers, who at the same time are the beneficiaries of very low freight rates. Operational changes to services for the traditionally slower-volume fourth quarter has the potential to disrupt the improving reliability trend, but we expect results over the next few months to only be marginally down on September’s peak,” said Simon Heaney, senior manager of supply chain research at Drewry.

Building on Drewry’s long established schedule reliability benchmarking that started back in 2005; the new Carrier Performance Insight provides the ability to benchmark the reliability performance of container carriers on a port-to-port, trade lane, service and industry-wide basis. This information is available via a user-friendly website powered by data from global shipment management software solutions provider CargoSmart.