The construction of a 900-metre-deep deep-sea quay near the HoogTij business park along the North Sea Canal is set to begin this summer. HoogTij is divided into two parts: a site reserved for port-related companies (the maritime section) and a site intended for land-based companies (the land section). The total area can accommodate 130 hectares of business activity. 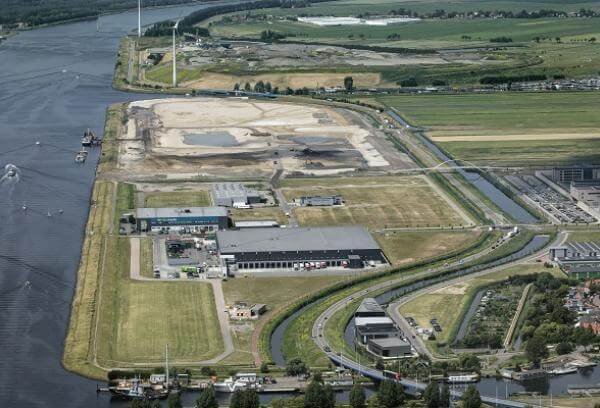 In late October 2017, Container Terminal CTVrede Steinweg and logistics services provider, Gam BAKKER decided to relocate to the HoogTij business park section of the port area.
The next step is the construction of the new deep-sea quay, slated to begin in August 2018.
The large site to be excavated in order to ensure free access to the North Sea Canal will create an ‘encased’ quay which will prevent vessels loading and unloading in the Port from blocking access to the waterway. The large quantity of land and sand released by this process will be used to raise the second stage of the HoogTij project – the dry site – and prepare it for allocation.

The construction of the deep-sea quay is being commissioned by Port of Amsterdam and carried out by the Hakkers en Van Oord development joint venture. The work is scheduled to be completed in late 2019. On completion, the entire port-related site – which covers almost 30 hectares – will be available for allocation. In addition to CTVrede Steinweg and Gam BAKKER, the port site also accommodates companies facilitating large wind farms on the North Sea (offshore-related companies), agricultural and food companies and logistics services providers. The site is also suitable for companies with a greater impact on the environment, including those operating in the circular economy.