Another landmark moment has taken place in Crowley Maritime Corp.’s history as VT Halter Marine, Inc., a subsidiary of VT Systems, Inc., officially began construction on Taíno, the second of two liquefied natural gas (LNG)-powered, combination container – Roll-On/Roll-Off (ConRo) ships for the company’s liner services group. VT Halter Marine and Crowley entered into a contract for the pair of ships in November 2013 and construction began on the second ship with the first steel plate cutting in Pascagoula, Miss., this morning. A similar ceremony took place for the first ConRo, El Coquí, when its construction began in October 2014.

“This is a momentous occasion in the history of the company and in the Commitment Class build program,” said John Hourihan, senior vice president and general manager, Puerto Rico liner services. “Like our customers, we have been waiting with great anticipation for construction to begin on the Taíno, and we look forward to the day in the near future that they will begin service between the U.S. mainland and Puerto Rico. These new ships embody superior technology, and will offer enhanced performance and safety while setting new standards for environmentally responsible shipping.”

“We are pleased and proud to be building these superb ships for Crowley. Crowley is an outstanding company and a leader in the industry and we are delighted to be partnering with them on these cutting edge vessels,” said Jack Prendergast, chief executive officer, VT Halter Marine. 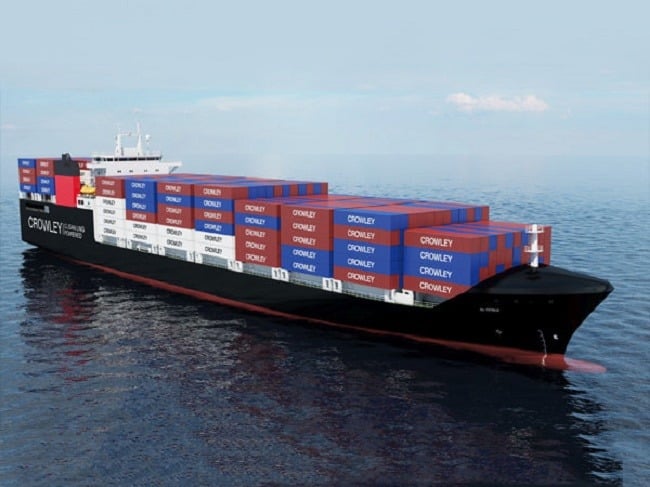 The Commitment Class ships have been designed to maximize the carriage of 53-foot, 102-inch-wide containers, which offer the most cubic cargo capacity in the trade. The ships will be 219.5 meters long, 32.3 meters wide (beam), have a deep draft of 10 meters, and an approximate deadweight capacity of 26,500 metric tonnes. Cargo capacity will be approximately 2,400 TEUs (20-foot-equivalent-units), with additional space for nearly 400 vehicles in an enclosed Ro/Ro garage. The main propulsion and auxiliary engines will be fueled by environmentally friendly LNG. The ship design was provided by Wartsila Ship Design in conjunction with Crowley subsidiary Jensen Maritime, a leading Seattle-based naval architecture and marine engineering firm.

The Jones Act ships will replace Crowley’s towed triple-deck barge fleet, which has served the trade continuously and with distinction since the early 1970s. These new ships, which are named El Coquí (ko-kee) and Taíno (tahy-noh), will offer customers fast ocean transit times, while accommodating the company’s diverse equipment selection and cargo handling flexibility – benefits customers have enjoyed for over 60 years. El Coquí and Taíno are scheduled for delivery second and fourth quarter 2017 respectively.

Powered by LNG, the Crowley ships will set a new standard for environmentally responsible shipping. LNG is a stable gas that is neither toxic nor corrosive and is lighter than air. It is the cleanest fossil fuel available, netting a 100-percent reduction in sulphur oxide (SOx) and particulate matter (PM), and a 92-percent reduction in nitrogen oxide (NOx). LNG also has the ability to significantly reduce carbon dioxide (CO2), a contributor to greenhouse gas emissions, as compared with conventional fossil fuels.

Designing, building and operating LNG-powered vessels is very much in line with Crowley’s overall EcoStewardship© positioning and growth strategy. The company formed an LNG services group earlier this year to bring together their extensive resources to provide LNG vessel design and construction management; transportation; product sales and distribution, and full-scale, marine solutions.

Crowley has served the Puerto Rico market since 1954, longer than any other carrier in the trade, With more than 250 Puerto Rico employees, Crowley is also the No. 1 ocean carrier between the island commonwealth and the U.S. mainland with more weekly sailings and more cargo carried annually than any other shipping line.