Now the disaster ship Costa Concordia floats again, the work of the Dutch Conquest MB1 crane ship and her crew is there almost done. The Dutch company Conquest Offshore has in the recent months, in cooperation with a large group of international companies, installed the sponsoons that will refloat the Costa Concordia.

The unique crane vessel (60 people) is characterised by the 1400 ton full revolving crane (360 degrees), the large (36x136m) and strong (min. 20 ton/m2) deck area and the very small working depth (3.5 m). These features make the Conquest MB 1 suitable for the special assignment in Italy. Conquest Offshore is proud of the exceptional team with whom this complicated task is completed successfully.

On January 13, 2012 the cruise ship Costa Concordia with 4252 people on board became world news because it capsized in front of the harbor of the island of Giglio and sank against the rocks. The disaster took 32 lives. A disaster rumbled long after in Italy. The first phase is almost over now the ship is floating, and almost ready to be towed to Genoa. 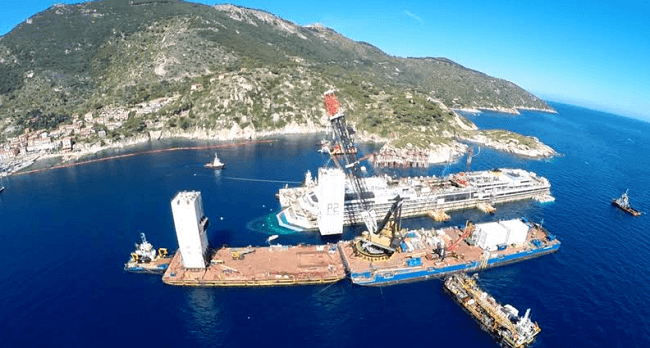 The Italian government is sitting on top of it to see if the protected area of Giglio is not damaged. Environment, safety and reputation of the parties play an important role.

The salvage of the Costa Concordia had a number of alternatives. The preferred option now implemented – to refloat the ship and tow it to the harbor of Genoa – asked for a special crane vessel. The recently completed multi-purpose crane ship Conquest MB1 is designed for marine and offshore heavy-lift operations. By coincidence, just in time operational to assist in the mega job along the Tuscan island of Giglio. 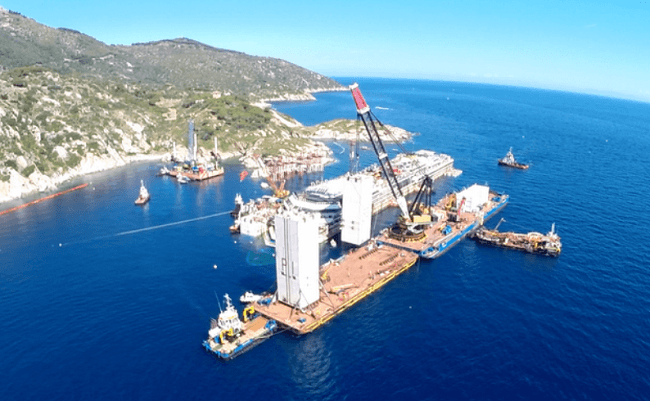 Offshore Conquest combines the strengths of three Dutch companies. It is a joint venture between Concordia Group, Van Es Holding group of companies (ea Jack-Up Barge) and Zwagerman Offshore Services. By combining the knowledge and skill of these three, a unique crane vessel in the world was created, which could be employed directly on the salvage operations of the Costa Concordia.

During the trip to Genoa from Giglio, Conquest MB1 is nearby and ready for any needed assistance.