Color Line and Ulstein sign a firm contract on construction of the world’s largest plug-in hybrid vessel. The environmentally sound ship will be servicing Sandefjord – Strömstad from summer 2019. Ulstein won the contract in competition with several other yards. It has now been decided that Ulstein Verft will be constructing Color Line’s new hybrid vessel.

“It is very gratifying that the Norwegian shipbuilding industry has proven its competitiveness internationally, and that Color Line contributes to the further development of the Norwegian maritime industry,” says CEO Trond Kleivdal at Color Line. 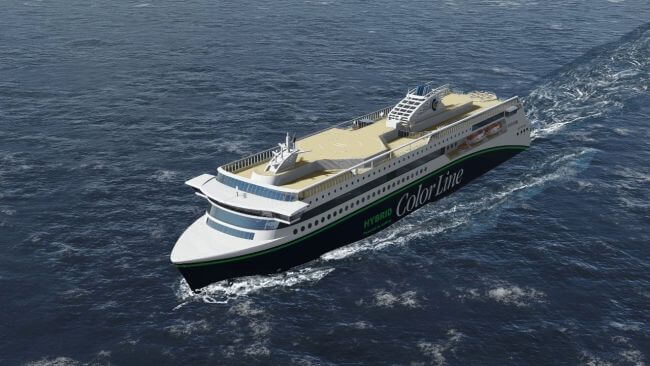 “We are very pleased that Color Line decided to proceed from a Letter of Intent to a firm contract on the construction of this hybrid vessel. This is an important milestone for us, and we are looking forward to the further cooperation with Color Line”, states CEO Gunvor Ulstein at Ulstein Group.

Due to this contract, and the recent contract on an offshore wind vessel for Acta, Ulstein Verft can bring back several of the engineers who have been on leave. The engineering department at Ulstein Verft is now fully manned.

The natural environment is an accelerator to Color Line. The vessel takes into use new solutions to reduce noise and emissions. The ship will be a plug-in hybrid, in which the batteries are recharged via a power cable with green electricity from shore facilities or, as a secondary alternative, recharged on board by the ship’s generators.

With shore power in Sandefjord all Norwegian ports on Color Line’s network will have shore power facilities. The ship will have full battery power into and out of the fjord to Sandefjord inner harbour. It will therefore not give emissions of harmful greenhouse gases or nitrogen and sulphur compounds in this area. The 160m vessel, with the working title “Color Hybrid”, can take on 2,000 passengers and 500 cars. It will have almost double capacity as M/S “Bohus”, which is scheduled to be phased out when the new ferry will be put into operation in summer 2019.

The ship will provide significantly increased capacity on the route between Norway and Sweden, and will represent expanded and improved services on board and thus a new and better travel experience. The new vessel will be built according to Norwegian flag requirements and registered in the Norwegian Ordinary Ship Register (NOR). Color Line is currently the only company in the international passenger and freight traffic to and from Norway with ships registered in the Norwegian Ship Register and with Norwegian headquarters.

The total employment effect of the ship construction represents approximately 950 man-labour years, according to an analysis by MENON.