Cochin Shipyard under the Ministry of Shipping was listed in Bombay Stock Exchange and National Stock Exchange on 11 August 2017. The company has raised Rs 1442crores from the IPO which has been a combination of fresh issue and offer for sale in the ratio of 2:1. The IPO was oversubscribed by over 75 times with more than Rs 1.11 lakh crore being raised against the offer of Rs 1442crores.

The Issue also saw a strong interest from retail segment with over 20 lakh applications , the highest in the last decade. The QIB portion was over subscribed by over 63 times and the HNI portion was over subscribed by 287 times. After listing the shares in the exchange, they opened at 20% increase despits the markets being low. The company undertook very detailed roadshows in India, Far East, Europe and US. Overall there was very positive market sentiments, towards the IPO. 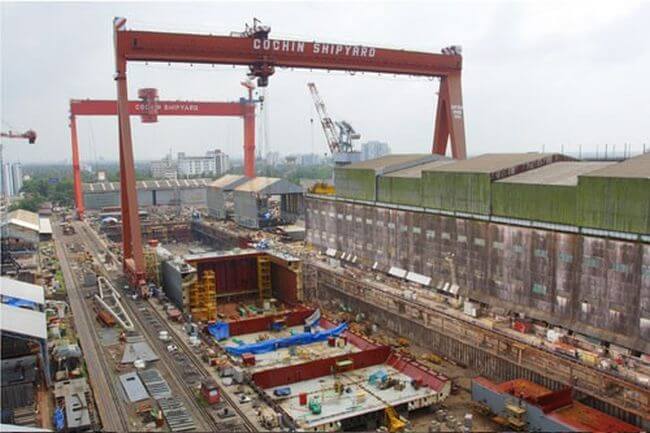 The proceeds of the fresh issue part of the IPO, totaling approximately Rs 961crores will be used by CSL for part funding two expansion projects costing Rs 2800 crores. The projects are – a dry dock at the Cochin Shipyard premises to accommodate bigger ships for building and repair and a ship repair facility in the adjacent Cochin Port Trust premises by setting up of a ship lift and transfer system.

Cochin Shipyard was incorporated in the year 1972 as the first green field shipyard of India. As on date Cochin Shipyard Limited is the largest public sector shipyard in India in terms of dock capacity. CSL caters to clients engaged in the Defence sector in India and clients engaged in the commercial sector worldwide for Shipbuilding and Ship Repair. In addition to shipbuilding and ship repair, CSL also offers marine engineering training.