The first in a series of ‘mega-class’ container vessels being built for French Ship owner CMA CGM will be powered by the Wärtsilä X92, low-speed, 2-stroke engine. The vessel is to be built by Hanjin Heavy Industries & Construction (HHIC) in Subic Bay, Philippines. WinGD is the joint venture company between Wärtsilä and China State Shipbuilding Corporation (CSSC), which took over Wärtsilä’s 2-stroke engine business in January 2015. The company is owned 70 per cent by CSSC and 30 per cent by Wärtsilä.

The new vessel will have a cargo capacity of more than 20,000 TEU and will be the largest container ship in the CMA CGM fleet. The Wärtsilä X92 engine chosen to power this huge vessel is the largest of Wärtsilä’s Generation X series of engines. It has a power range from 24,420 to 73,560 kW at 70 to 80 rpm. The low revolutions enable higher ship propulsion efficiency for the large and ultra large vessels the engine is designed for. The engine features low fuel consumption across the entire operating range, thanks to the application of common rail technology. 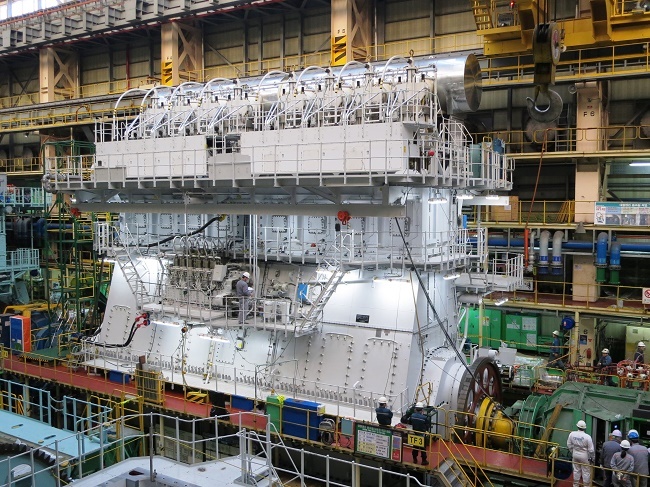 “The Wärtsilä X92 engine has been designed to provide exceptional reliability, the lowest operating costs and minimal exhaust emissions, all of which are essential in today’s operating environment. As container vessels are getting ever bigger in order to achieve economies of scale, it is essential that the engines and propulsion equipment are developed accordingly so as to achieve the efficiencies needed. Our successful 2-stroke Generation X engines are evidence of our proven competence and technological leadership and, as a result, we are playing an important role in the large and ultra large container vessel segment,” says Martin Wernli, CEO of WinGD.

The Wärtsilä X92 is the most recently launched and the largest of the Wärtsilä Generation X series of engines. The first of these engines to be built passed its design validation and factory acceptance test in February of this year. The FAT was held at the Ulsan engine works of Korean licensee Hyundai Heavy Industries. By successfully passing this test, the engine is shown to have fulfilled all the requirements of the classification societies. The remaining type approval test and sea trials will take place in the second half of this year.