On July 26, 2017, the new CMA CGM Theodore Roosevelt began its voyage by leaving Asia’s shipyards to begin its rotation on the South Atlantic Express Service (SAX) from Hong Kong to Shanghai.

Making its way to the port of Panama City, where the Panama Canal opened new locks last summer, the ship stopped over on August 21st before reaching the port of Colón a day later on August 22nd. The Theodore Roosevelt is scheduled to head north to Norfolk, Virginia on August 28th, head south to visit Savannah on August 31st before looping up to Charleston on September 2nd. This will be its last stop before reaching the Port of New York and New Jersey for the inauguration of the Bayonne Bridge on September 7, 2017.

This New York-New Jersey port call has been organized specifically to celebrate the new Bayonne Bridge. CMA CGM is demonstrating its support of the investment to improve access and infrastructure at the nation’s third-busiest port complex. The elevated bridge and deepened channel will lead to a new era of larger container ship visits. 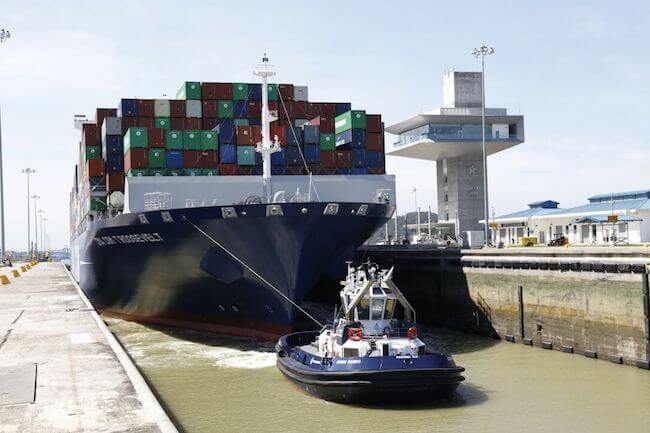 With a capacity of 14,414 TEUs (twenty-foot equivalent units) and a length of 1200feet the CMA CGM Theodore Roosevelt is four times bigger than the statue of Liberty and four times longer than an American football field. It is the largest ship to have stopped over on the East Coast of the United States, and is a sibling vessel to the CMA CGM Benjamin Franklin, which in 2015 was the largest capacity container ship to call at any U.S. port.

CMA CGM Group has named six of their ships after U.S. presidents. The newest addition in this series pays tribute to the 26th President of the United States, who was born in New York, was New York City Police Chief, Governor of the state and a Nobel Peace Prize winner.
“He is an extraordinary individual and leader, and a historic symbol of both New York City and the nation,” said Jacques R. Saadé, Group Chairman and Chief Executive Officer of CMA CGM.

The Bayonne Bridge is the fifth longest arch bridge in the world, connecting the states of New York and New Jersey by spanning the Kill Van Kull Strait between Bayonne, N.J. and New York’s Staten Island.

Built in 1931, the Bayonne Bridge has been under construction for several years to raise its elevation and deepen its harbor to allow for ships larger than 10,000 TEUs to access its ports. The Panama Canal expansion in 2016 opened up the East coast route to larger ships but until the bridge work was completed, the Port of New York and New Jersey could not accommodate the larger ships.

Now, with an apron raised, the Bayonne Bridge allows access to the port of Newark to container ships with a draft of 49,5feet.

September 7, 2017, will bring together the ship bearing an historic New Yorker’s name and a storied bridge that for 45 years was the world’s longest steel-arch bridge. Together, they mark a new chapter in commercial shipping.

Petrobras Fuel Tank Explodes In Brazil, Killing Two
Want to share your tips and advice? Got questions? Visit the community forum to ask questions, get answers, meet people, and share your tips!