The CMA CGM Group, a worldwide leading shipping group, is pleased to announce that the CMA CGM BOUGAINVILLE has entered the group’s fleet and becomes the largest containership in the world under French flag. It is the fourth vessel of the 18000TEU series, bearing the names of great explorers. She pays tribute to the French explorer Louis-Antoine de Bougainville, who led, as Captain, the first French official world tour in the 18th Century.

Largest vessel sailing under French flag, the CMA CGM BOUGAINVILLE was delivered on August 25th. With her 400m length – about 4 football fields end to end – and 54 meters width, this giant of the seas and her extraordinary dimensions, has a capacity of 18,000 TEU (twenty-feet equivalent containers). 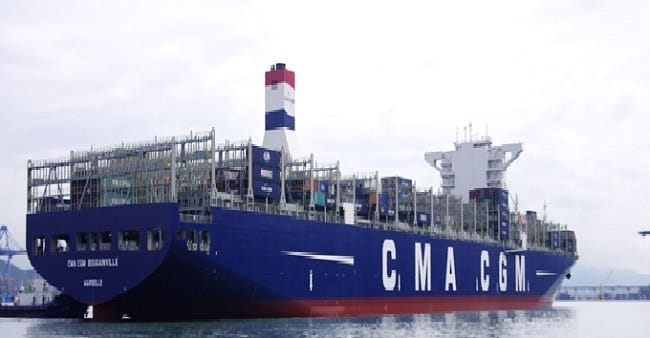 The CMA CGM BOUGAINVILLE symbolizes the dynamism of a French group, which became a world leader and a key player of the world’s global economy.

Calling at Le Havre every 77days, the CMA CGM KERGUELEN is positioned on one of the most emblematic lines of the CMA CGM Group. The FAL joins Europe to Asia.

In a globalized economy, this gigantic vessel has the capacity to transport almost 200,000 tons of goods between European, Middle East and Asian markets and becomes a key element in such trades. Thanks to its calls in the CMA CGM hubs at Malta and Klang ports, transshipment connections are offered towards worldwide markets.

The CMA CGM BOUGAINVILLE, a vessel at the cutting edge of environmental technologies

In fact, the vessel’s CO2 emissions average at only 37g of CO2/km for each container, energy efficiency almost three times higher than recorded by the group’s fleet 10 years ago.

The CMA CGM BOUGAINVILLE was delivered by the Korean shipyard Samsung on August 25th and begun its first rotation by calling at Asian ports.

She will call at Shanghai on September 5th, Port Kelang on the 13th, Suez on the 15th and Algeciras on October 1st to finally arrive at Le Havre on October 5th in the morning.