You are here: Home › Shipping News › ClassNK Releases Guidelines For Use Of Drones In Class Surveys
TwitterFacebookLinkedInPinterestBuffer

Because drone-related technologies are improving at an extremely rapid pace, application in diverse fields is increasingly expected. In the maritime industry as well, efforts aimed at utilization in the field of inspections and surveys are being carried out.

At the International Association of Classification Societies (IACS), discussions on the use of Remote Inspection Techniques (RIT) including drones in class surveys are already underway, and IACS Rec. 42 (Guidelines for Use of Remote Inspection Technics for Surveys) was revised in June of 2016. A revision of the related IACS Unified Requirements has also been completed and will take effect in January 2019. 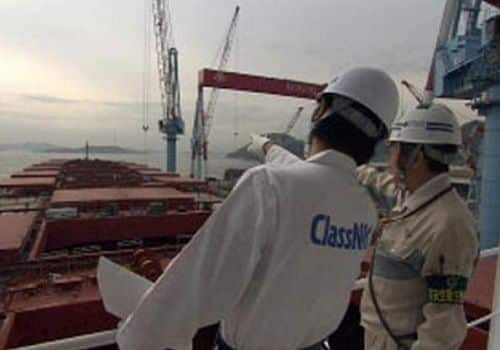 On the other hand, when flying a drone in places such as the cargo hold or ballast tank of a ship, it is important to take into consideration the possibility that the drone may not function properly due to being in a closed space surrounded by magnetic material which may interfere with some of the sensors of the drone (GPS and magnetic compass) which are closely related to flight stability.

In regards to this situation, ClassNK established a R&D Roadmap in September 2017, which described efforts related to drones in the item “Survey Technology Innovation,” one of its Four Focus Areas of R&D. In January 2017, the Society began a full-scale study of the use of drones in class surveys, and has conducted various types of verifications by carrying out basic performance experiments and experiments to test flight inside ship tanks and cargo holds.

Combining the technological knowledge in connection with drones accumulated by these efforts and the know-how in class surveys amassed by ClassNK over its long history to date, the applicable range and procedures for applying drones to class surveys along with the technical considerations for safe operation and the requirements for drone service suppliers were arranged in these Guidelines.