You are here: Home › Shipping News › Classification Societies Give Thumbs Up To MAN 175D
TwitterFacebookLinkedInPinterestBuffer

MAN Diesel & Turbo has announced that its MAN 175D marine engine program has achieved another milestone on its path and on time. Following on from its multiple achievements during 2016 that saw it employed in a series of commercial orders in diverse applications both as main propulsion engine and and GenSet, the MAN 175D high-speed diesel engine has now received serial type approval from the main classification societies.

Testing took place in Frederikshavn from May 22nd to 24th in the presence of 10 international classification societies, including ABS, BKI, BV, CCS, DNV GL, KRS, LR, NK, RINA and RRS. MAN Diesel & Turbo reports that the engine performed perfectly, exceeding all class requirements, with subsequent inspection of the engine and its parts demonstrating its robustness and durability. As a result, the MAN 175D is now globally certified for marine propulsion in both diesel-mechanic and diesel-electric modes, and auxiliary operation for a power output of up to 2,220 kW for the 12-cylinder version. 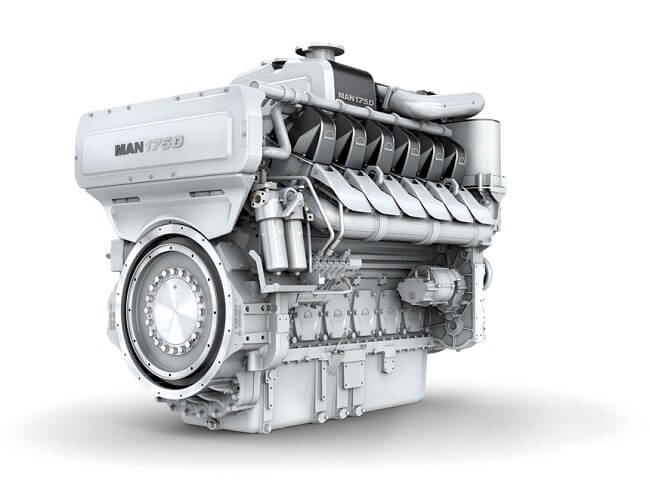 The marine engine supplements and completes MAN Diesel & Turbo’s maritime product portfolio. The engine is available with an output spectrum from 1,500 to 2,200 kW and is optimised for propelling ferries, offshore supply vessels, tug boats and working vessels.

Lex Nijsen – Head of Four-Stroke Marine – MAN Diesel & Turbo, said: “The MAN 175D is compact, reliable and efficient – properties that are of essential importance for use on working vessels to allow safe manoeuvrability in the most challenging and rough weather conditions.”

He continued: “The business case behind it also has to be right for the customer, and this is where the engine sets standards in more than just fuel consumption. Our long-term aim for this engine is to make it the most efficient engine we’ve ever had throughout its lifetime.”