The high container volume has enabled the Port of Colombo, where the container terminal is located, to see overall growth in the three consecutive years since the facility became operational, CICT said. 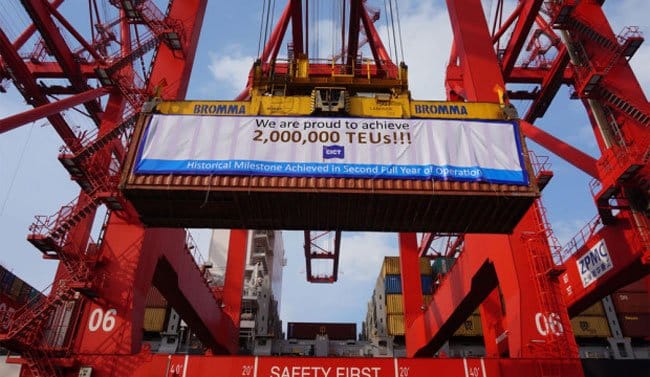 The box volume handled by CICT contributed to the overall throughput at the Port of Colombo, which rose by around 11 percent during the year.

“It must be emphasised that this historic achievement of 2 million TEUs was made possible mainly by the synergies developed through our parent company China Merchants Port Holdings (CMPH). The ability to access the CMPH global network was the key factor in gaining and attracting new transhipment volumes to the Port of Colombo,” Tissa Wickramasinghe, CICT General Manager – Commercial & Marketing, said.

CICT, which is the first and currently the only deep water terminal in South Asia equipped with facilities to handle the largest vessels afloat, is a joint venture company between China Merchants Port Holdings Company Limited (CMPH) and the Sri Lanka Ports Authority (SLPA).