You are here: Home › Shipping News › Chinese Passenger Ship With 458 Aboard Sinks In Yangtze River, 5 Bodies Recovered, Some Still Alive Inside
TwitterFacebookLinkedInPinterestBuffer

The Xinhua report said eight people had so far been rescued, including the ship’s captain and engineer, who said the vessel sank rapidly after being caught in a storm.

The ship, named Dongfangzhixing, was carrying 405 Chinese passengers, five travel agency workers and 47 crew members, according to the administration.

The vessel was heading to southwest China’s Chongqing city from Nanjing, capital of east China’s Jiangsu Province. It sank at around 9:28 p.m. local time in the Jianli section of the river.

Five bodies have been recovered so far from a ship that capsized on the Yangtze River in southern China with 458 people on board, a state-run newspaper reported on Tuesday.

The official Hubei Daily said on its microblog that 12 survivors had also been rescued.

Some still alive inside capsized ship

Some passengers are still alive inside the hull of a passenger ship carrying 458 people, many of them elderly Chinese tourists, that capsized on the Yangtze River, state media said on Tuesday, in what could be one of China’s worst disasters for years.

Five bodies had been recovered since the ship capsized in a storm late on Monday, state media said. 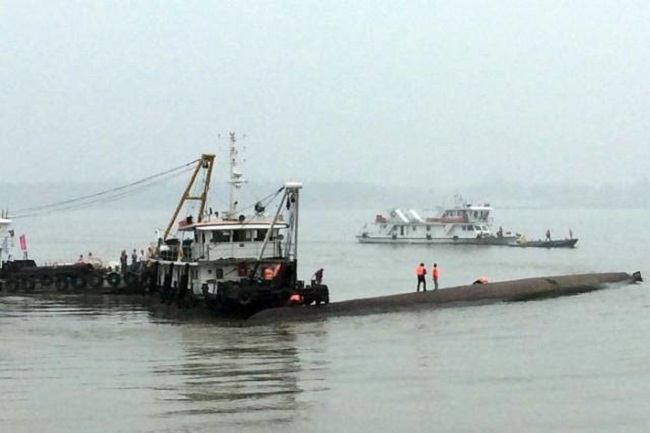 Only about a dozen people had been rescued so far from the four-decked tourist boat amid confusing reports about how many had been saved.

The microblog of the official People’s Daily newspaper said some passengers were still inside the Eastern Star, while the official Xinhua news agency said rescuers could hear people calling for help from inside the four-deck ship.

State television showed a rescuer on the capsized hull with a blow torch, apparently preparing to cut into the ship, while dozens of rescue boats battled strong wind and heavy rain to reach the stricken vessel.

Chinese President Xi Jinping has ordered that no efforts be spared in rescue work and Premier Li Keqiang was heading to the scene of the accident in central Hubei province, Xinhua said.

It also later reported that initial investigations had found the ship was not overloaded and that it had enough life vests on board for the number of passengers it was carrying. Those rescued were wearing life vests, Xinhua said.

The captain and the chief engineer of the Eastern Star, who were among the few to be rescued, had been detained by police for questioning, Xinhua said.

According to the Yangtze River navigation administration, the pair had said the ship sank quickly after it was caught in what was described as a sudden “tornado”.

Among those on board the ship were 406 tourists, aged from around 50 to 80, on a tour organised by a Shanghai tour group, and 47 crew members, the People’s Daily said.

State radio reported that the ship sank within about two minutes and that no distress call had been issued. Seven people swam to shore to raise the alarm, state media said.

The Hubei Daily, another official publication, said the ship had capsized in water that was about 15 metres (50 feet) deep.

Fishing boats were among the dozens of vessels helping in the search and rescue, Xinhua said. More than 1,000 armed police with 40 inflatable boats had also been sent, it said.

The Eastern Star, which has the capacity to carry more than 500 people, was heading to southwest China’s Chongqing city from Nanjing, capital of east China’s Jiangsu Province. It sank at around 9:28 p.m. local time in the Jianli section of the river.

Accidents of this magnitude are uncommon in China, where major rivers are used for tours and cruises. The incident is the worst on the Yangtze since a tug undergoing sea trials sank in January, killing 22 of the 25 people on board.

The Eastern Star is owned by the Chongqing Eastern Shipping Corporation, which runs tours along the Three Gorges area along the Yangtze river.

Wang Jianhua, its vice general manager, said it was the first time an accident of this magnitude had happened to the company. The Hubei Daily said the company has been operating since 1967.

d’Amico Announces Sale Of Two MR Vessels For USD13.5 Million Each
Want to share your tips and advice? Got questions? Visit the community forum to ask questions, get answers, meet people, and share your tips!