The outlook for global container port demand growth is now more optimistic and Chinese players are on the acquisition trail in an aggressive and highly confident manner. Major M&A deals are changing the landscape, with more to come, according to the Global Container Terminal Operators Annual Report 2017, now in its 15th year of publication by global shipping consultancy Drewry.

Drewry’s container port demand forecast is more positive than in last year’s report, exhibiting a 4% CAGR and adding a further 152 million teu of port throughput to the global total by 2021. This is a consequence of improved port throughput growth rates in the second half of 2016 and into 2017, and a more positive general global economic outlook. 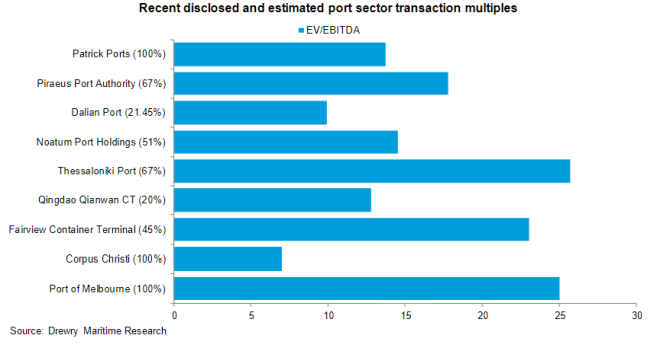 That said, there remain numerous risks and uncertainties at present, including tensions in the Middle East and Korean peninsula, the protectionist and unpredictable stance of the US administration, and the impact of Brexit. This is perhaps one reason why the global container port capacity is projected to increase by a CAGR of 2.7%, based on confirmed additions only. This is markedly lower than the forecast demand, and hence, average utilisation levels are expected to rise.
Neil Davidson, Drewry’s senior analyst for ports and terminals said: “While there are certainly some encouraging signs for the demand growth outlook, the risk profile for terminal operators has increased and most of the traditional global/international players remain cautious. The exception to this are the Chinese port companies who are pursuing expansion and investment both at home and overseas in an unprecedentedly aggressive manner.”

M&A activity in the port sector is at a high level. About $3.1 billion worth of deals have been struck so far in 2017, driven by Chinese companies such as Cosco Shipping Ports and China Merchants Ports. In the last year, more than half of the acquisitions by global/international terminal operators have been made by Chinese players. As the chart above shows, the valuation of port and terminal businesses range between 13x and 26x EV/EBITDA. Chinese companies are typically prepared to pay a premium.

Cosco Shipping Ports has moved up Drewry’s operator league table as a result of the merger of Cosco and China Shipping, and will move further up in the coming years due to the acquisition of Noatum and OOCL’s terminals. The China Cosco Shipping group is projected to add the most capacity of any of the global/international terminal operators over the next five years.

“The Chinese players are more comfortable with risk than the established international operators right now, and have a geo-political strategy rather than a purely financial one. They are snapping up assets and opportunities and have the appetite and financial clout to take many more in the coming years,” added Davidson.