The next time the United States sends warships by China’s man-made islands in the disputed South China, officers aboard will have to decide how, if at all, they will engage with a pair of giant lighthouses that Beijing lit up there this month.

While the U.S. and other navies mostly rely on electronic instruments to confirm their ships’ positions, visual fixes from lighthouses are still used in certain conditions. 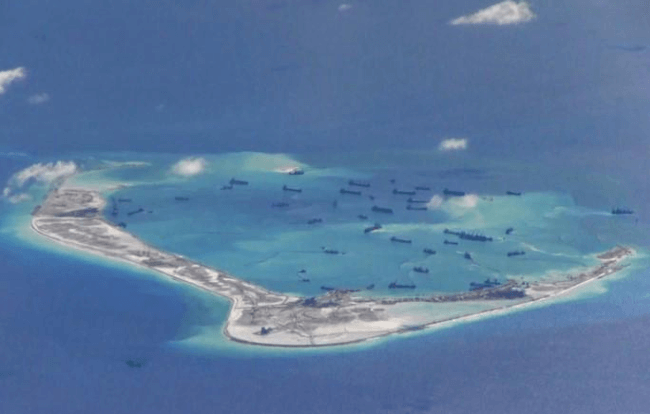 Any such moves would play into a strategy “geared to bolstering China’s claims by forcing other countries to effectively recognise Chinese sovereignty by their actions,” said Ian Storey, a South China Sea expert at Singapore’s Institute of South East Asian Studies.

“If naval and other ships from other countries, including the U.S. would be obliged to use and log them, it could be taken as de facto recognition of China’s sovereignty,” Storey said.

U.S. officials have not confirmed or denied reports that the U.S. Navy will soon conduct freedom-of-navigation operations within 12 nautical miles of the artificial islands. Asked about those reports on Tuesday, U.S. Secretary of Defense Ash Carter said the United States would sail or fly wherever international law allows.

China claims most of the energy-rich South China Sea, which links the Indian and Pacific Oceans. About $5 trillion in shipborne trade passes through its strategic sea lanes every year.

References to the lighthouses are likely to find their way into international shipping charts and registers and the logbooks of foreign navies. That would help China to potentially build a long-term legal picture of effective occupation, despite any formal diplomatic objections of rival claimants.

The lighthouses reinforce Beijing’s continued strategy of gradually “changing the facts on the water”, Storey said.

China has extensively reclaimed seven islets and atolls in the Spratlys over the last two years. The runways and other facilities China is building on them have alarmed the United States and its partners in the region, who say they could be used for military purposes.

Washington has repeatedly stated it does not recognise any Chinese claim of territorial waters around the reclamations built on previously submerged reefs.

Both serving and retired Western naval officers say modern electronic navigation devices, including the U.S.-created Global Positioning System, mean that lighthouses are of declining value to all kinds of shipping.

But, when sailing within several miles of ocean features such as reefs, or when electronic devices fail, ships rely on them to help fix and log a position visually.

Commander Bill Clinton, a spokesman for the U.S. 7th Fleet, did not detail the circumstances under which U.S. ships would use the lighthouses. But, he said, they had “no impact on 7th Fleet’s ability to fly, sail and operate in international waters of the South China Sea.”

Trevor Hollingsbee, a retired naval intelligence analyst with Britain’s defense ministry, said building lighthouses on the reclaimed reefs was a “rather cunning” move by China.

“The use of lighthouses is declining everywhere, but there will always be times when their use is unavoidable, and that goes for all mariners in the South China Sea,” Hollingsbee said.

The 2014 “Sailing Directions” for the South China Sea produced by the U.S. National Geospatial-Intelligence Agency gives extensive details on the Spratlys, including lighthouses, visible wrecks and lagoon entrances – but without citing who has sovereignty over them.

It declares some 52,000 square miles (135,000 sq km) as “Dangerous Ground” due to inadequate surveys and bad weather. It also noting that sovereignty in the area is “subject to competing claims which may be supported by a force of arms.”

China “will never recklessly resort to the use of force, even on issues of sovereignty,” said Fan Changlong, one of the vice chairmen of the Central Military Commission which controls the Chinese armed forces. He was speaking to defense ministers from the 10-member Association of South East Asian Nations at a security forum in Beijing.

The artificial islands in the Spratlys “will not affect freedom of navigation in the South China Sea”, Fan said. The new lighthouses “have already begun to provide navigation services to all nations”, he added.

Malaysia’s Armed Forces chief Zulkefli Mohd Zin expressed concern at the security forum over “the unwarranted provocation by the Chinese over the construction on the garrisoned islands of the South China Sea”.

Time will tell what China’s intention is, he said. But Malaysia has to accept China’s explanation that the reclamation and construction activities in the Spratlys is “for good purposes and the purposes of all human kind.”

(By Greg Torode, Additional reporting by JR Wu in TAIPEI, Michael Martina and Ben Blanchard in BEIJING and My Pham in HANOI. Editing by Bill Tarrant)