A total of 49 people have been detained in connection with chemical blasts in the Chinese port city of Tianjin last August that killed 165 people, the government said in a report on Friday while putting losses at more than $1 billion.

Anger over safety standards is growing in China, after three decades of swift economic growth marred by incidents from mining disasters to factory fires, and President Xi Jinping has vowed that authorities will learn the lessons paid for with blood.

The government report on the Tianjin disaster, carried by state media, blamed the ignition of hazardous materials which had been improperly or illegally stored on site.

Police and prosecutors have detained 49 people, including 13 from Tianjin Ruihai International Logistics Co Ltd, who operated the storage facility, as well as port, customs, work safety and transport ministry officials, the report said. 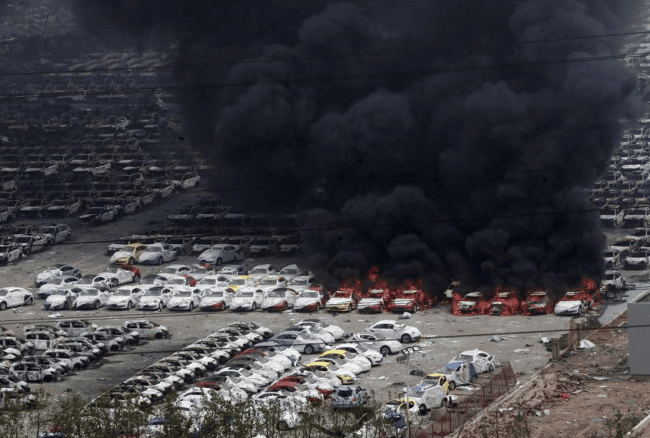 It did not give details on what crimes exactly they are suspected of.

However it said laws and regulations were widely flouted by a series of departments, including police and environmental protection agencies.

“Daily oversight and management were seriously lacking,” it added.

Reuters was unable to reach company representatives for comment. The report recommended that Ruihai be closed down and fined.

Firefighters in the northern port told Reuters in August they believed spraying water after the first blast had exacerbated the blaze.

But the report said that was not the case.

The government had previously announced that Ruihai had been found to have been handling dangerous chemicals without a licence.

Company executives had also told state media they made use of their connections to get fire safety and environmental approvals.

China’s work safety chief was also sacked shortly after the explosions and has been detained.

Total looses have been assessed at 6.87 billion yuan ($1.05 billion) and eight people are still missing, the report said.

Even six months after the disaster, authorities are continuing to monitor for pollution, it added.

Tianjin is the 10th busiest port in the world, and is not far from the capital, Beijing,