Chevron’s massive Gorgon liquefied natural gas (LNG) facility in Australia has hit technical difficulties, a spokesman said on Monday, resulting in a temporary suspension of exports less than a month after it started first production.

Chevron’s $54-billion project began producing LNG for export on March 7, but has since encountered mechanical problems at a cooling unit that prevents the plant from chilling natural gas for exporting on tankers.

“We are working through some mechanical issues with the propane refrigerant circuit on train 1 at the Gorgon plant site,” a Chevron spokesman said.

The spokesman said he could not at this stage give any details and added that “a site team is currently assessing the situation and we should know more shortly.” 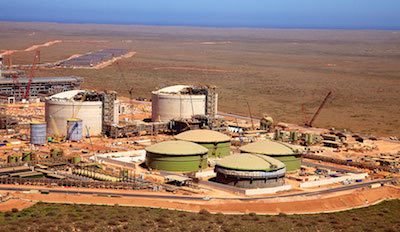 Traders said that the outage of the huge facility, located on Australia’s northwestern coast, could support Asian LNG prices which have slumped by almost 80 percent from their peak in 2014 to $4.30 per million British thermal units. Prices have plummeted as supply has soared but demand has stalled, especially in formerly booming Asia.

The interruption in exports will put pressure on Chevron, whose stock price so far has fared relatively well in the slump compared with peers (see chart: http://fingfx.thomsonreuters.com/gfx/ce/1/650/650/Chevron%20vs%20Competitors.jpg.

Investment bank Jefferies said on Monday that Chevron remains its “top pick in the integrated oil sector” due to rising production and an expected improvement in its cash cycles.

Yet, Jefferies warned that “the key risk to our Buy thesis over the next 12 months is project execution risk, particularly at Gorgon and Wheatstone (another LNG project in Australia).”

Gorgon has the capacity to produce 15.6 million tonnes of LNG per year.

The facility was initially expected to cost $37 billion and start exports in 2014, but delays and soaring costs pushed the start date back and the price tag up.

Its first cargo, which was shipped in March, is expected to be delivered to Japanese utility Chubu Electric this month, sources said.