Carnival Corporation & plc,  the world’s largest travel and leisure company, announced it has signed a multi-billion dollar contract to build four next-generation cruise ships with the largest guest capacity in the world. The contract with Meyer Werft is part of larger previously announced strategic memo of understanding with leading shipbuilders Meyer Werft and Fincantieri S.p.A for nine new ship orders between 2019 and 2022.

The four new ships will also feature a revolutionary “green cruising” design. The ships will be the first in the cruise industry to be powered at sea by Liquefied Natural Gas (LNG) — the world’s cleanest burning fossil fuel, representing a major environmental breakthrough.

The company said two of the ships will be manufactured for AIDA Cruises at Meyer Werft’s shipyard in Papenburg, Germany. Additional information about the ships, including which new ships will be added to each brand, will be made available at a later date.

Based on Carnival Corporation’s innovative new ship design, each of the four next-generation ships will have a total capacity of 6,600 guests, feature more than 5,000 lower berths, exceed 180,000 gross tons and incorporate an extensive number of guest-friendly features. A major part of the innovative design involves making much more efficient use of the ship’s spaces, creating an enhanced onboard experience for guests. 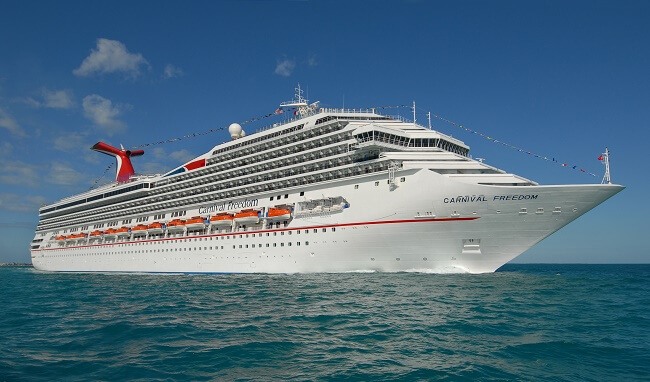 Pioneering a new era in the use of sustainable fuels, the four new ships will be the first in the cruise industry to use LNG in dual-powered hybrid engines to power the ship both in port and on the open sea. LNG will be stored onboard and used to generate 100 percent power at sea – producing another industry-first innovation for Carnival Corporation and its brands. Using LNG to power the ships in port and at sea will eliminate emissions of soot particles and sulfur oxides.

In addition to the two ships being built in Germany, Meyer Werft – which had the capacity to accommodate these four ship-building orders in its production schedule — will also build the two additional ships detailed in today’s announcement at its shipyard in Turku, Finland. Each new ship will be specifically designed and developed for the brand and the guests it will serve, underscoring the company’s goal to consistently exceed guest expectations and provide first-time and repeat guests with the vacation experience of a lifetime on each and every cruise.

“We are looking forward to executing on the next step in our fleet enhancement plan,” said Donald. “At a cost per berth in line with our existing order book, these new ships will enhance the return profile of our fleet. These are exceptionally efficient ships with incredible cabins and public spaces featuring a design inspired by Micky Arison and Michael Thamm and developed by our new build teams.” Arison is chairman of the board of directors for Carnival Corporation & plc and Thamm is CEO of the Costa Group, which includes AIDA Cruises and Costa Cruises.

Added Donald: “It will be exciting to see our shipbuilding team bring these new ships to life. Every step of the way, our focus is on designing state-of-the-art ships that provide a vacation experience our guests will love, and we are putting all of our creative energy and resources into making sure we achieve that goal.”

“These ships will expand our leadership position for the Costa Group, the market leader in all the major European markets,” said Thamm. “These will be spectacular ships designed specifically for our guests who sail on our Costa Group brands.”

Bernard Meyer, CEO of Meyer Werft, said: “In past years, we have built seven highly successful ships for AIDA Cruises. We are honored that Carnival Corporation has entrusted us with the implementation of this ambitious shipbuilding program, and we look forward to building these four magnificent ships.”

As part of each shipbuilding company’s long-term strategic partnership with Carnival Corporation, additional new ship orders are being explored over the coming decade.