Apostleship of the Sea (AoS) has responded to the faith and pastoral needs of a group of seafarers after their captain was found dead on their ship during a voyage from New York, United States to Tilbury, Essex.

The container ship, Santa Bettina, was a week into its voyage when the captain apparently took his own life on board, leaving its crew members distraught and traumatised. 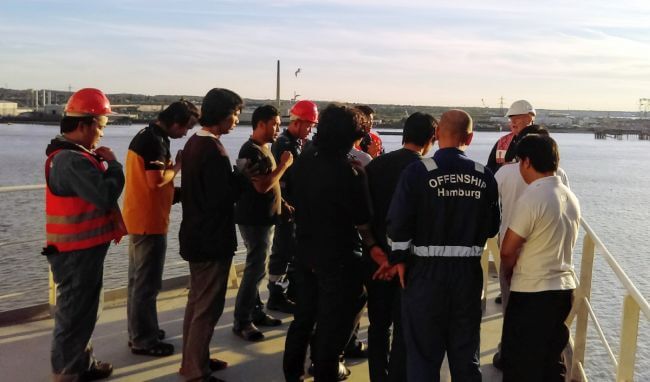 AoS port chaplain Fr Colum Kelly went on board the ship when it docked in Tilbury on May 21 to say Mass for the crew and to bless them.

“I spent time listening to the crew and of the stress that they had been feeling during the voyage. It emerged the death took place one week into the voyage. It was the first time the crew had sailed with that captain so they knew very little about him,” said Fr Colum.

“His body was laid in his sealed cabin for the remainder of the voyage. Particularly distressed was the young seafarer who had discovered the body. It was the first time he had seen a corpse,” he added.

The crew requested Mass to be said and for specific areas of the ship to be blessed, including some cabins and the spot where the body was found. Fr Colum said the atmosphere seemed to change after Mass and there was a sense of relief among the crew.

“We did what we were able to do for the crew; talking to them and trying to bring some consolation. It was a terrible time for the seafarers, but at the end of the day there was a sense of joy in the midst of the grief, stress and bewilderment,” he said.

A new Polish captain then came to join the ship. He had sailed with this crew previously and was obviously well liked.

Fr Colum added, “This tragic incident is a powerful example of AoS’ ministry of going to where the hurt is… the Church in outreach to those on the margins, where the Holy Father encourages us to go.”