Shackleton. Endeavour. Falcon. These are just some of the names suggested for the UK’s next world-class polar research ship as part of a campaign launched today for the public to put forward names for the state-of-the-art vessel to be built in the North West of England.

Set to set sail in 2019 and backed by £200 million of government funding, the polar research ship will be built at the world-famous Cammell Laird shipyard on Merseyside. 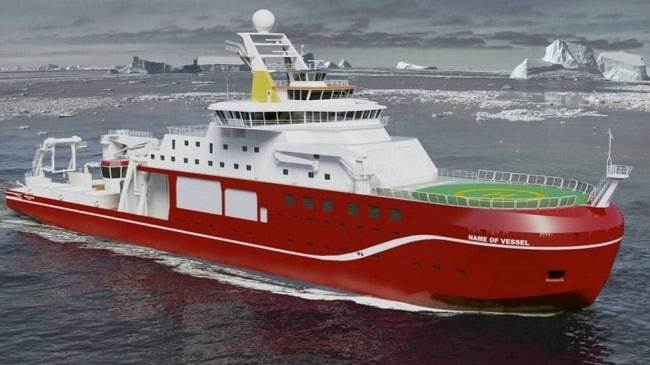 Tonne-for-tonne, the ship – together with NERC’s existing two blue water research ships – will provide the UK with the most advanced floating research fleet in the world and will help put the UK at the forefront of ocean research for years to come.

Today, the science minister Jo Johnson is calling for school pupils, parents, teachers and adults to take part in a once in a lifetime opportunity to suggest a name they would like to see on the side of the UK’s polar research ship when she takes to the seas.

“Can you imagine one of the world’s biggest research labs travelling to the Antarctic with your suggested name proudly emblazoned on the side? The polar research ship represents a leap forward in securing Britain’s place as a world leader in marine and climate change science – and illustrates this government’s commitment to invest in research facilities on a record scale.

With the eyes of the world on this ship, this campaign will give everyone across the UK the opportunity to feel part of this exciting project and the untold discoveries it will unearth.”
NERC’s chief executive, Duncan Wingham, said:

“NERC’s new ship will help put the UK at the cutting edge of polar research, as part of this extensive polar programme with £200m investment from the government. Built in the North West of England, she will help bring an economic boost to the region and to the UK ship building industry. Today we are launching our campaign to bring our ship to the UK people, asking for their help to find her a name that encapsulates her role at the forefront of UK science. We are excited to hear what the public have to suggest and we really are open to ideas.”

The ship, which will be constructed on Merseyside, will also bring a major boost to the ship building trade in the North West, after manufacturers Cammell Laird beat off competition from companies in Europe and the Far East to win the contract. The project is also expected to create around 400 jobs and 60 apprenticeships.

Operating in one of the world’s most challenging global environments – our polar regions – we’re looking for an inspirational name that exemplifies the work it will do. The ship could be named after a local historical figure, movement, or landmark – or a famous polar explorer or scientist.