The California Air Resources Board approved a new regulation designed to further reduce pollution from ocean-going vessels while docked at California’s busiest ports.

The rule builds on progress achieved by the groundbreaking At-Berth Regulation adopted in 2007. That rule has achieved an 80 percent reduction in harmful emissions from more than 13,000 vessel visits since 2014. The updated rule adds new vessel categories which will be required to control pollution when they run auxiliary engines or auxiliary boilers (for most tanker vessels) while docked. These auxiliary engines power the electricity and other onboard operations during a vessel’s visit, which can run from less than one day to several days.

“This rule clamps down on air pollution from the largest ships while they’re docked in California ports, and there are multiple ways terminals, ports, ship owners and operators can comply,” said CARB Chair Mary D. Nichols. “The action CARB took today will deliver cleaner air and public health benefits to all those who live in port-adjacent communities throughout California.”

Vessels covered under the existing regulation include container ships, “reefers” (carrying refrigerated cargo) and cruise ships. The updated regulation adds auto carriers and tankers, two categories that produce 56 percent of all fine particulate pollution (PM 2.5) from ocean-going vessels at berth in California ports. Once fully implemented, the updated regulation will deliver a 90 percent reduction in pollution from an expected additional 2,300 vessel visits per year, and result in a 55 percent reduction in potential cancer risk for communities near the Ports of Los Angeles, Long Beach, and Richmond.

The existing regulation stays in force through 2022; the updated regulation starts in 2023 when container, reefer and cruise vessels – already included under the existing rule – will transition to the new regulation. Auto carriers will need to comply starting in 2025. Tankers docking at the Port of Los Angeles and the Port of Long Beach must also comply starting in 2025, while tankers in Northern California have until 2027.

The rule requires that every vessel coming into a regulated California port either use shore power (e.g., plug in to the local electrical grid) or a CARB-approved control technology to reduce harmful emissions. These include diesel particulate matter, fine particulate matter (PM2.5) oxides of nitrogen (NOx, a precursor to smog), reactive organic gases (ROG, another precursor to smog), greenhouse gases, and oxides of sulfur (SOx). One example of an alternative to shore power is what is known as capture-and-control technology that employs a “bonnet” to cover a ship’s exhaust stacks, both containing and treating harmful emissions.

Ship owners, terminal and port operators that need additional time to comply may petition the Board to use alternative means of achieving equivalent or greater emissions reductions in port-adjacent communities. An example would be purchasing zero-emission heavy-duty trucks for port use. Proposed projects will require extensive community review as well as CARB approval. 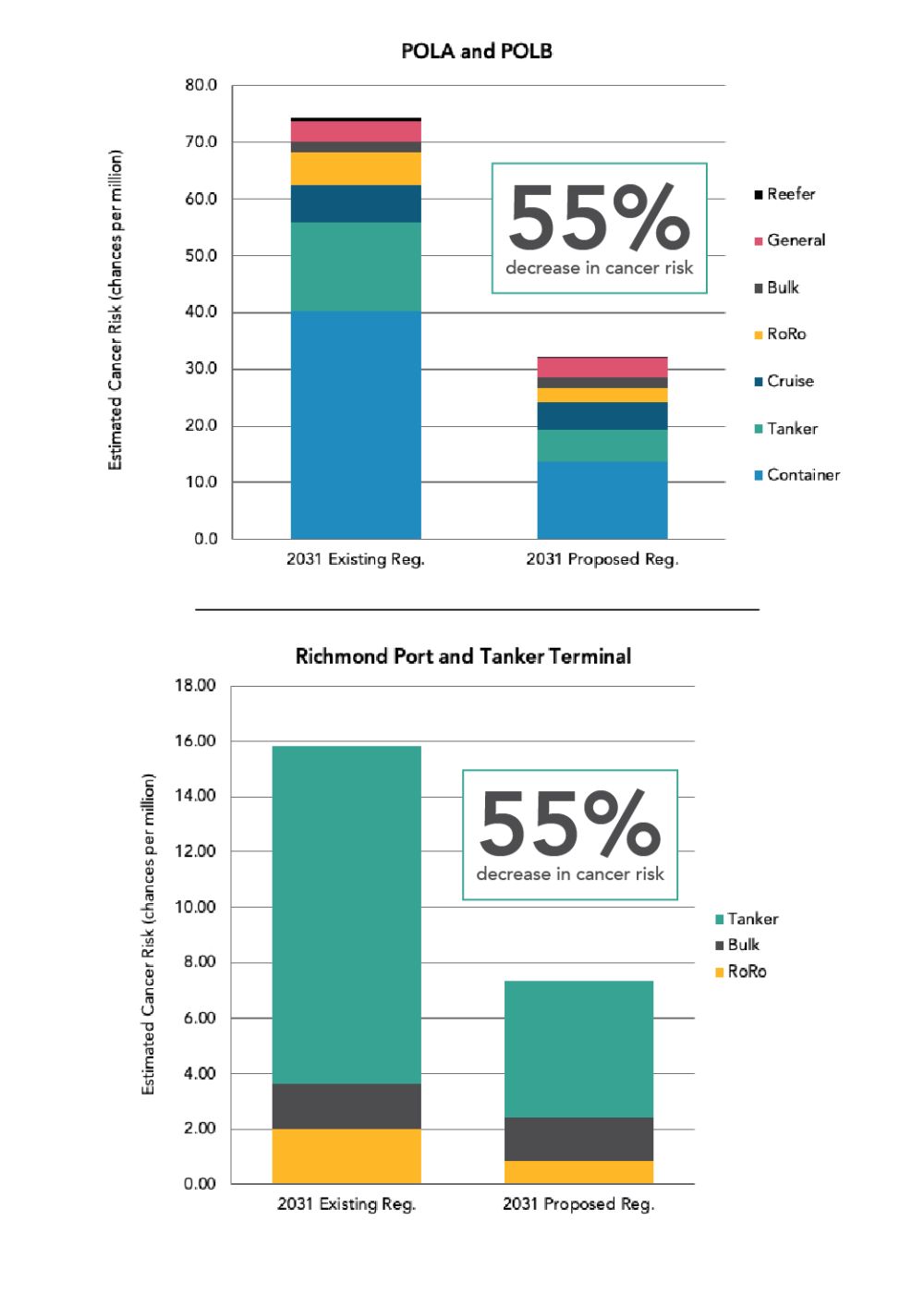 Ships or terminals that are unable to connect a vessel to an emissions control technology (due to equipment failure, port congestion, etc.) during a visit may be able to comply with the regulation by requesting a Terminal or Vessel Incident Event, a limited number of which are granted to each regulated terminal operator and vessel fleet per year.

In limited circumstances, port and shipping entities that are unable to comply will, if their application is approved by CARB, also have an opportunity to pay into a remediation fund. These funds must be used for environmental projects that will benefit port-adjacent neighborhoods.

The updated regulation also includes an interim evaluation, to be conducted in 2022, to evaluate progress and identify any problems relating to implementation or compliance with the updated At-Berth Regulation.