Sri Lankan authority and Indian Coast guard are continuously performing boundary cooling in response to the fire, which had re-ignited on September 7, rising up to 60 meters high from the main weather deck of the ship.

Indian Coast Guard ships Sujay, Shaurya, Sarang, along with Sri Lankan Ships and tugs have been working since Tuesday morning in this operation.

The fire onboard the Very Large Crude Carrier MT New Diamond first occurred on 3rd September, due to a boiler explosion in the engine room of the ship. 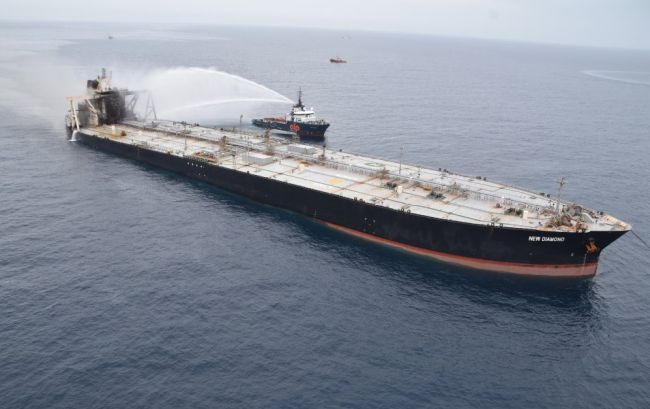 However, due to the usage of large quantities of water to suppress the fire and to ensure there is no re-ignition, the ship’s aft portion has gone down by 3 feet.

Also, a narrow diesel oil slick has reportedly appeared at the aft of the ship which is considered to be from the bunker fuel oil used for machinery operation. The ship is carrying 2,70,000 tonnes of crude oil cargo and around 1700 tones of bunker fuel.

The ship – MT New Diamond, which was built in 2000 with 300,000-dwt capacity, was heading to the port of Paradip in India where the Indian Oil Corporation operates a 300,000 barrel…click here to read the full article.